There is a rule of thumb that when someone spends all of the time obsessively against something it is because they are plagued by that self same issue. An example is the anti-gay preacher who has homosexual trysts. 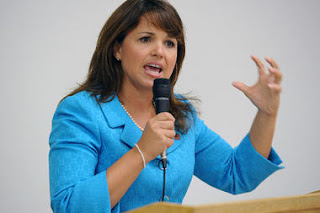 That thought comes up with Tea Party Republican Christine O’Donnell who is running on an exclusively anti-sex, anti-masturbation platform. She is really obsessed with sex. On her first job, with a conservative publisher, she filed a sexual discrimination lawsuit and claimed sexual harassment. While she is unmarried and her opponent (Mike Castle) is married, she is working a whisper campaign that her opponent is gay.

I have never seen anyone this obsessed with sex not named Hugh Hefner and that leads to some obvious questions. Is she trolling bars looking for hook-ups? Is she a lesbian? She reminds me of Julia from 1984.

For more of this temptress read FireDogLake and Crooks & Liars.
Posted by knighterrant at 8:42 AM