After Israel bombed a Gaza hospital I did a little research into other instances of this and found that, in the 20th and 21st centuries, bombing hospitals is incredibly common. So common, in fact, it is impossible to calculate a total.

The why is really rather simple. Bomb a military barracks and you may kill a few men. Bomb a hospital and you will kill many times more as those wounded in future attacks have no place to be treated. Bombing hospitals is a great casualty multiplier. Attacking hospitals is second only to torture as the most commonly committed war crime.

World War I
The earliest instance of the aerial bombing of a hospital was on May 31, 1918 when the Germans bombed the rear echelon hospital complex at Etables in the Pas-de-Calais, France. 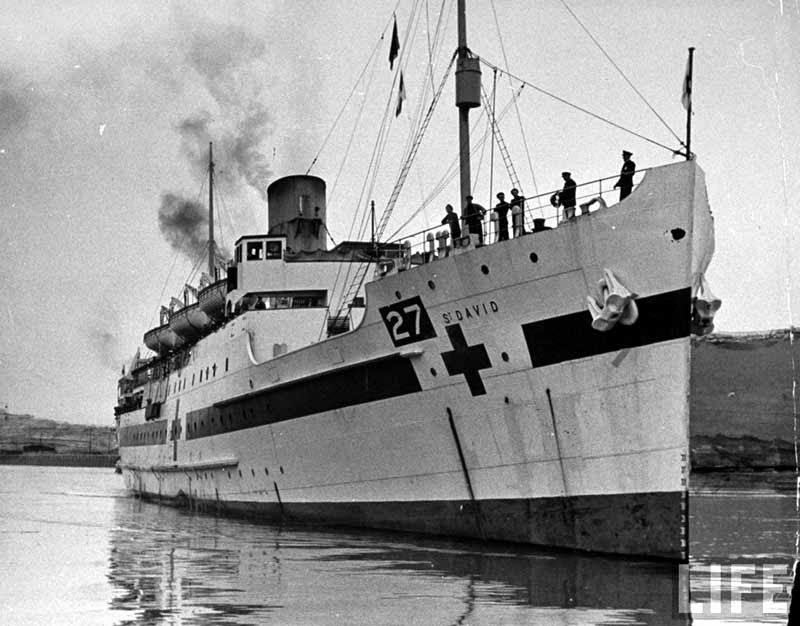 All sides bombed hospitals although that was usually part of carpet bombing campaigns where everything from hospitals to dry cleaners were bombed indiscriminately. For example, the Hiroshima Shima Hospital was, not deliberately, ground zero for the first nuclear detonation in war. Germany bombed hospitals as part of the blitzkrieg attack on Poland in 1939. During the Anzio battle of the Italian campaign German bombers attacked and sunk the hospital ship St. David (pictured) on January 24, 1944.

Korean and Vietnam Wars
The US Air Force engaged in extensive strategic bombing of urban targets in both wars. Operation Rolling Thunder during the Vietnam War was famously intended to bomb North Vietnam "back to the Stone Age." During that war, America bombed the Bach Mai Hospital in Hanoi. It was later rebuilt with money largely donated from the United States.

Yugoslav Civil War
NATO got bomber happy in their efforts to protect civilians from ethnic cleansing. NATO bombed over 20 hospitals, as well as over 200 schools, in less than three months of extensive bombing. Some hospitals appear to have been accidentally hit but, given NATO's pride at the "precision bombing" and their targeting of "dual use" facilities, most of the hospitals were deliberately bombed.

Iraq Wars
During the second Gulf War, American forces bombed a maternity hospital in Baghdad in April, 2003. Many other hospitals and clinics had been bombed in the years between the Gulf Wars. In May, 2012, the Iraq government dropped barrel bombs on an hospital in Fallujah as part of the ongoing civil war in Iraq.This month, the Iraq government has bombed hospitals in several towns including Tikrit and Shirqat. 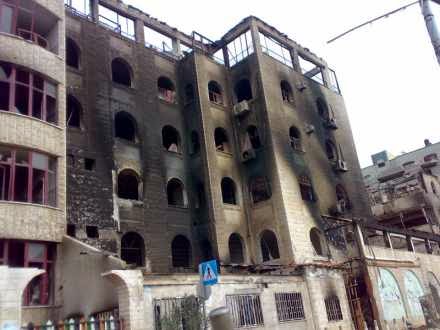 Israel has attacked hospitals in Gaza several times over the years.  In 2009, they bombed three hospitals including fire bombing the Al Quds Hospital (pictured) with white phosphorus. The use the same excuse that NATO gave in Yugoslavia, dual use facilities. Most recently, Israel bombed the Shifa Hospital in Gaza.

Insurgents
It doesn't take an air force to bomb a hospital. Many have been bombed by terrorists and insurgents. The Taliban has bombed hospitals in Afghanistan. Somali rebels bombed a hospital in Mogadishu. In 1991, the IRA planted a bomb in the military wing of the Musgrave Park Hospital in Belfast, killing two and wounding 11 including a four month-old baby.
Posted by knighterrant at 3:44 PM No comments:

I typed that deliberately provocative phrase into Google, not knowing what I would find. What I found was this shocking manifesto.
The author is Moshe Feiglin, member of the ruling Likud Party and Deputy Speaker of the Knesset. His proposal, published in Israel July 15, 2014, reads like a memo Martin Bormann might have sent to Heinrich Himmler.
Ethnic Cleansing
Feiglin would issue an ultimatum ordering Palestinians to leave Gaza. Anyone staying behind would be subject to attack by the full might of the Israel Defense Force. The Israeli government has implemented this step.
He believes the passage from Gaza into Egypt would be easy.
The truth is that Egypt has closed its border with Gaza and has no intention of opening it to a flood of refugees. Civilians in Gaza are trapped.

Attack
Feiglin wants Israel to attack Gaza with the full might if the Israeli military with no concern for the lives of children or other non-combatants.
On July 24, Israel attacked a UN school, killing 15 and wounding over 200. Siege
Step three in Feiglin's master plan is a total siege of Gaza. There has been an ongoing blockade of all but food and medicine into Gaza for the past seven years. Feiglin wants to stop the food, too, and starve the occupants.
In the past, Israel has used food as a weapon against Gaza. They have not yet tried full on starvation as a weapon.

Retaliation
Feiglin uses the word "defense" but he is really talking about retaliation. He wants any attack on Israel or Israeli soldiers to be repaid with a devastating retaliation with no concern for civilian casualties.
When Germany invaded Poland, civilian deaths exceeded military deaths by a ratio of 10 to 1. Israel claims half the Gaza casualties are combatants while the UN sets the ratio at about 3 civilians for each combatant.

Conquer
Feiglin's next step is the invasion and conquest of Gaza. Again, civilian casualties be damned.

Elimination
This is Feiglin's own terrifying word. He tries to soften things a little but he describes the removal of the entire Palestinian population of Gaza either through death or deportation.
Absorption
Feiglin's final step in his final solution of the Gaza problem is the absorb the now depopulated Gaza into Israel. He calls this "Sovereignty."


I am not saying that Israel's treatment of Gaza is as bad as the Nazi's. It is not. But I have to add, not yet. If the Deputy Speaker of the Knesset gets his way the only difference would be the ovens and death camps.

The current leadership of Israel has learned the wrong lesson from World War II. They somehow learned that walling off an ethnic group they fear and hate to be followed by the forced deportation of that group is, somehow, a viable policy option.
Posted by knighterrant at 12:29 PM No comments:

Health Care Haves and Have Nots

Right now, I'm thrilled to live in California. We have a well functioning state health care exchange. As as result, I and millions of others fortunate enough to live in a state where their politicians care about their citizens, will retain our stable health care premiums.

Conversely, people in those states mostly run by Republicans that see their citizens as worthless pawns to sacrifice in bizarre political games face massive, and mostly unaffordable, increases in their premiums. Republicans, of course, are jubilant and plan to blame the premium increases that they have caused on Democrats.

The end result, which is entirely the goal of Republicans, is to divide the nation in half. The half with Democratic leadership will be healthier, more prosperous, and happier. The Republican half will be sicker, poorer, more miserable, and angrier. As Ted Cruz can tell you, poor and angry people are the most fertile ground for growing Tea Party fanatics.

Reality Check: The ruling by a three judge panel will be stayed and referred to the entire D.C. Circuit Court which will over turn the ruling by the two partisan Republican judges. Republicans, in turn, will appeal that judgement to the Supreme Court where the odds are, by the same 5-4 vote, they will reaffirm their judgement on the ACA. At the same time, Democrats will introduce simple legislation in the Senate to correct the problem, block Republican efforts to amend the hell out of it, and pass it onto the House which will bury it deeper than Argonaut Mine (in California, over a mile deep).
Posted by knighterrant at 12:21 PM No comments:

California - Drought or the New Normal?

California. Lush, beautiful, a land of orchards and fields. Is that all just history? Is California now just a big desert? 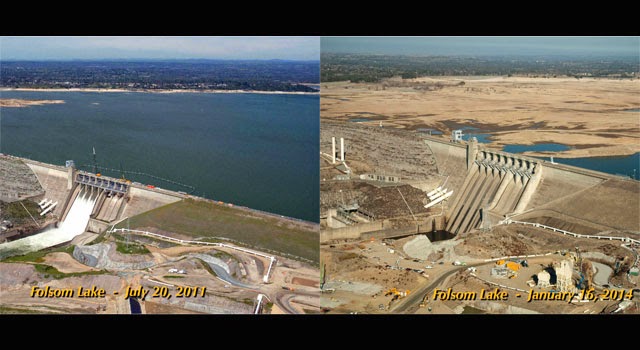 Folsom Lake was built a half century ago to hold a million acre-feet of water (One acre-foot is enough water for a family of four for an entire year). The levels are higher now than this photo, when the reservoir was at 17% of capacity, but still low. 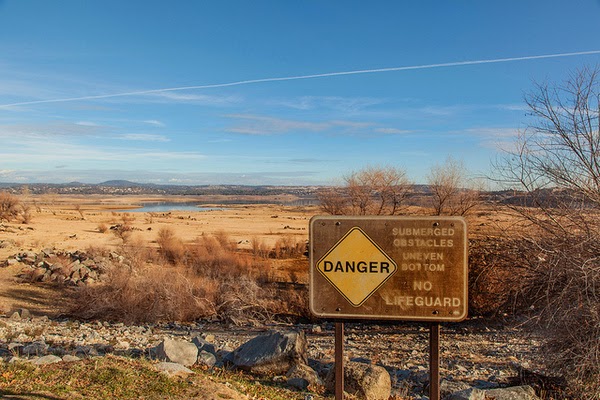 Ironically, this sign at Folsom Lake was not intended to be low comedy. 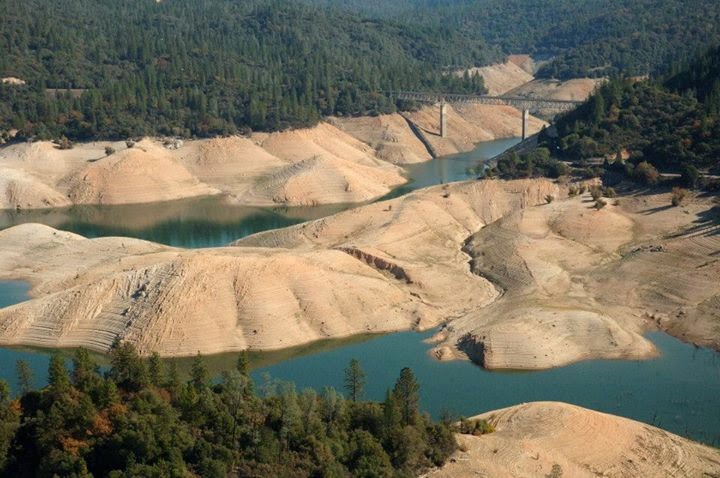 Oroville Lake is the keystone of the California Water Project that ships water to agriculture, industrial, and residential users throughout the state. At 3.5 million acre-feet maximum capacity, it is the largest reservoir in the state. It currently sits at just a third of that capacity. 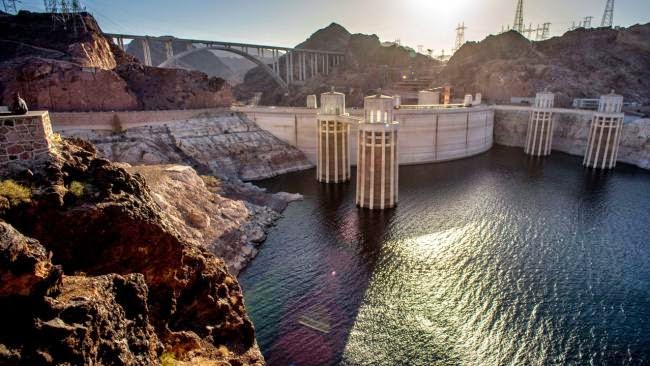 Lake Mead, behind Hoover Dam on the Colorado River, is at its lowest level since the reservoir was first filled during the Great Depression. The water level is 100 feet below its average and just 75 feet above the lowest limit where water can be pumped out of that ever shrinking mud hole. 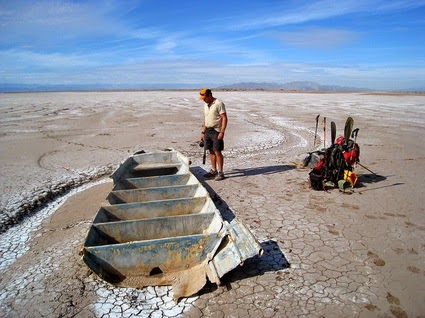 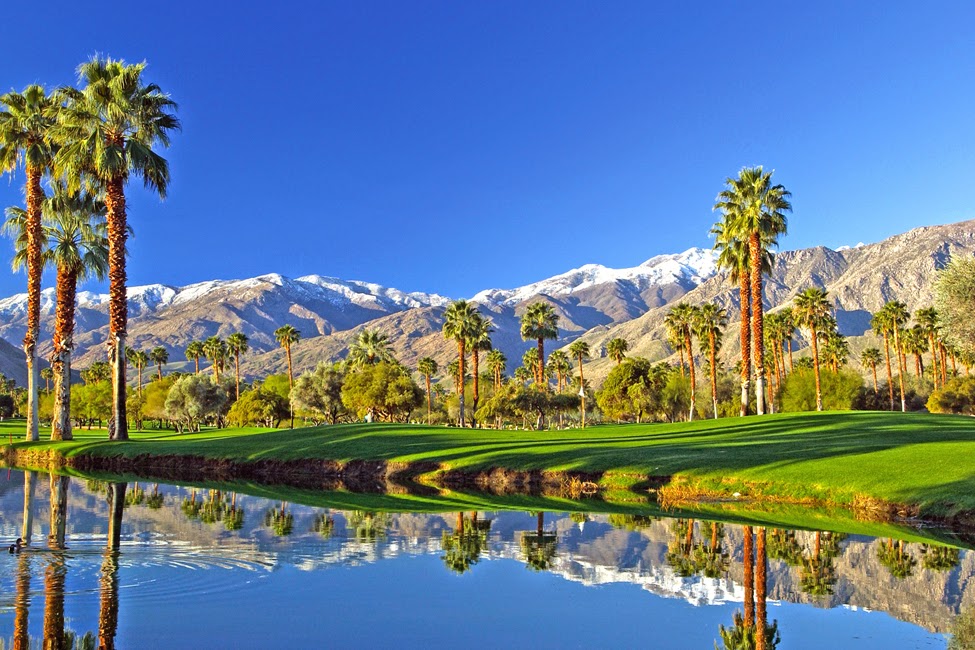 But all is not lost. If you are a millionaire you can find all the fresh water you could ever want extravagantly wasted on the high-end golf courses of Palm Springs. Pictured is the TPC at La Quinta.
Posted by knighterrant at 10:51 AM No comments:

The plan to cut up California into six different states is just another example of a billionaire, Tim Draper, who needs to have his taxes raised because he has way more money than good sense. This initiative did not come out of any popular desire for a break up, although it does reference a couple of long standing regional gripes. There was no actual thinking or planning. It's just an initiative born of an egoist and his money. 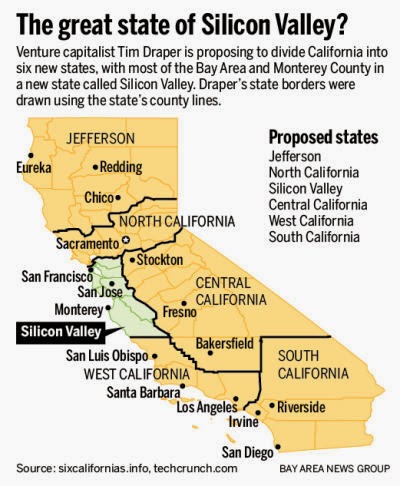 1. Silicon Valley
Besides being a silly name for a state, this is the only reason for the initiative. Draper's real goal is a separate country (probably called Draperstan) but, baby steps. The state of Silicon Valley would be, by far, the richest state in the nation with a per capita income twice that of New York State.

2. Jefferson
Logging interests in Northern California have long wanted to break away from the rest of the state and join with logging interests in southern Oregon to form a new state. The effort was never more than a joke when it began in 1941.

4. Central California
Central Valley farmers resent the fact that so much water passes through their region on the way to SoCal without them getting their fair share (they believe their fair share is all of it).

5. West California
An irrational construct into which Draper dumps the rest of the LA metroplex that isn't Orange County.

6. Northern California
An even more irrational construct that make no geographic sense whatsoever.

If, by some perverse miracle, this initiative passes it will fuck up all the water allocations within the state. The Colorado River compact is for the entire state of California. Nevada and Arizona will demand renegotiation and a much bigger share of the river. The Los Angeles Aqueduct starts in the Owens Valley, which would be in a different state that will want to keep that water.

I can't wait to see the TV commercials on this initiative.
Posted by knighterrant at 10:26 AM No comments: 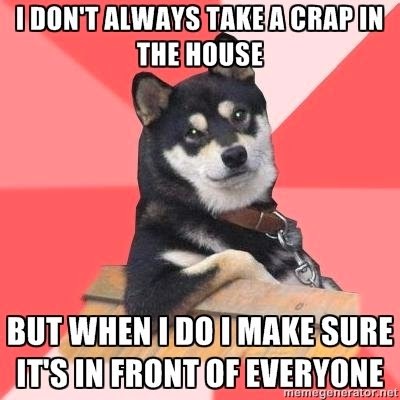 These are the dog days of summer, so called because the Dog Star, Sirus, is in the night sky. It is also the time of year that politicians get bored and do abysmally stupid things to get attention.

Posted by knighterrant at 10:29 AM No comments: