Whatever Happened to Officer Friendly? 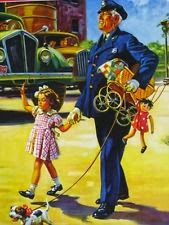 An argument could be made that Officer Friendly was always a myth we told children, like the Easter Bunny. What with the third degree, Bull Connor, John Burge, the Rampart scandal, and the blue code of silence, history is replete with police committing and getting away with every conceivable crime up to and including cold blooded murder.

It is also true that many police officers are fine, brave, upstanding individuals honestly trying to make their communities better places to live and work. The true story of Frank Serpico is a perfect example of both sides of that coin.

Police Are an Isolated Community

When was the last time you passed a police officer on the street and he smiled at you and said hello? My guess is never. Police usually wear those extra dark sunglasses designed to make any kind of eye contact impossible. They maintain a stern, emotionless expression designed to be both intimidating and off putting. Police have an us versus them philosophy where the us is other cops and the them is every other living person. They are taught that everyone they meet, everyone, is a potential enemy. That soon evolves into the belief that everyone IS an enemy. 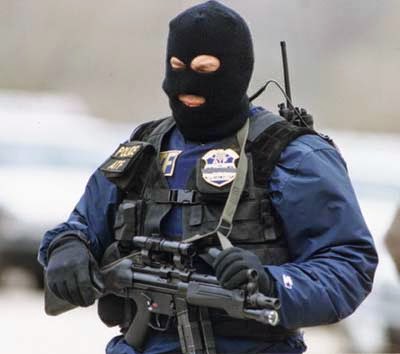 There was a time when Special Weapon and Tactics squad made sense. And, in very limited cases, they still do. In the '60's there were a handful of cases where police were completely outgunned. The two incidents that convinced police of the need for SWAT were the Watts Riots and the Hub pawnshop shootout in San Diego, both in 1965. While these elite squads were initially designed for crowd control and heavily armed opponents, over time uses of SWAT began to blur. It was like, why have an expensive Maserati if your not driving it to the Starbucks. SWAT was designed as a squad that might be need once every few years. Today, SWAT is being used when it is not needed and is, literally, overkill. There are 4.5 SWAT raids every day. SWAT is even being called out for no-knock raids to serve misdemeanor warrants. I'd also like to compare the SWAT officer above to this ISIS terrorist. 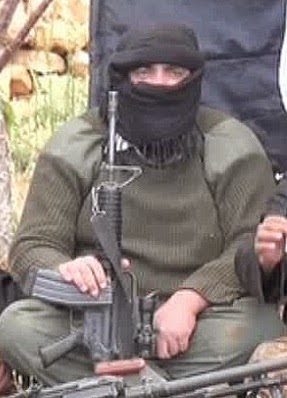 Both carry military grade automatic weapons. Both wear thick, probably armored, clothing. Both wear stocking masks to obscure their faces even at the risk of blocking their vision. Really, how can the cop even see with that balaklava covering his eyes. That can't be safe for either the officer or citizens. The point of the masks, in both cases, is to instill terror.

US Police Are Death Magnets
It is no surprise that no agency from the Justice Department to any local jurisdiction keeps stats on citizens shot by police officers. No one, no politician and no MSM outlet, want to know the numbers because the truth is absolutely staggering. Jim Fisher's True Crime blog did the research for the year 2011. By his count, in that year alone 1,146 citizens were shot by police and 607 killed. For comparison, in the span of 15 years (1995-2009) United Kingdom police have killed exactly 33 people. UK police kill as many people in 15 years as US police do in three weeks. Estimates are that since 9/11 American police officers have killed over 5,000 innocent citizens.

That doesn't count deaths in custody, which is a stat the Feds do keep. In 2011, 4,238 American prisoners died in custody. In the UK the number is 223, 33 died in police custody and 190 in prison custody.  For reference, the US has 5.5 times the population of the England and Wales.

Conclusions
That last number the most important. Every year American police officers kill more American citizens than the Mafia, than Mexican drug cartels, than terrorists. In the United States, especially in minority neighborhoods, police departments are an ever present, deadly threat.
Posted by knighterrant at 3:48 PM 1 comment: Links to this post

What to Expect from the Ferguson Grand Jury

The pathetically vague incident report on the Michael Brown shooting indicates how the St. Louis County grand jury investigation will proceed. It will be slow, incomplete, and obviously rigged.

The Grand Jury investigation will take months. As police shootings go, this should be easy. It was broad daylight, witness could see clearly. The whole incident from first contact to fatal shots took less than three minutes. Prosecutors expect to take at least two months, to mid-October, to present evidence, then the grand jury "can meet as long as they want" to reach a conclusion. They probably won't announce a decision until a particularly cold and blizzardly day in mid-December chosen more for suppressing protests than justice.

The result will be "No True Bill." Officer Darren Wilson has not been charged with anything. This means the grand jury will not be deciding whether to indict but simply reviewing evidence. The St. Louis County grand jury requires a 12-vote unanimous decision to indict, unlike other jurisdictions where a majority of a 23-member jury indicts. St. Louis County DA, Robert McCulloch, is a renown "friend of police" who has never seen anything wrong when police shoot a black man. His actions are a nudge-nudge, wink-wink to the grand jury to not indict.

The law is not on the side of justice.  At its loosest interpretation, certainly the one Robert McCulloch will describe to the grand jury, Missouri law says that a police officer can always shoot to kill as long as the officer expresses the lamest justification for the killing. All Wilson need do is claim he "felt" threatened by an unarmed man surrendering 30 feet away and it becomes a righteous shooting.

In case of trial, it will be held in a conservative, lily-white community. Let's say the grand jury goes rogue and files an indictment. The first act of the defense will be to demand a change of venue. As in the Rodney King case, the new venue will be chosen specifically to be sympathetic to the white officer. My early guess is Benton County where there are fewer than 30 African-Americans in the whole county.

There will be no sign of justice in the Michael Brown shooting case. As proof, I offer the fact that St. Louis police gunned down an unarmed man in broad daylight a few days after the Michael Brown shooting. They had absolutely no justification and no fear of any sort of discipline.
Posted by knighterrant at 2:28 PM No comments: Links to this post

Ferguson Debacle In One Quote


There are a few questions regarding the death of Michael Brown.
Ferguson police released a police report accusing the victim of a petty crime in a transparent attempt justify the shooting. In that the report the case status is listed as "Exceptionally Cleared."

I'm, generally, a pacifist. I've opposed US military adventures consistently since the Vietnam War of my youth.  I've seen very few wars during my life that I thought had to be fought. Two exceptions that come to mind are Israel in 1967 and 1973. In both wars, Israel had to fight and had to win or face annihilation.

The current war between the Kurds and ISIS in Iraq is another one. The closest parallel to ISIS in recent history is not the Taliban in Afghanistan but Pol Pot and the Khmer Rouge in Cambodia. ISIS has proven a willingness, even eagerness, to exterminate anybody who is not an ethnic Arab and not a Sunni Muslim and not an enthusiastic supporter of their brutality.

Left alone, ISIS will slaughter the Yazidi, every man, woman, and child. If they overrun the Kurds, the genocidal death toll will rival that of Adolph Hitler. ISIS will never be an existential threat to the United States but that is no excuse for idleness.
Call it the "Pottery Barn Rule" if you want but the US created ISIS when it invaded Iraq in 2003 and armed al-Qaeda (before it was even called that) in Afghanistan in the 1980's.
Posted by knighterrant at 12:40 PM No comments: Links to this post