How To Lose a Mooch in 10 Days 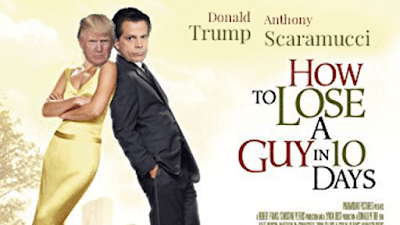 Mooch came to town, shat on everything for just ten days, and has now been kicked to the curb like a diseased whore. I hope, at least, that Donnie gave his rentboy cab fare.
Posted by knighterrant at 4:14 PM No comments: Links to this post

There have been a series of revelations of just how psychotic the White House has become. 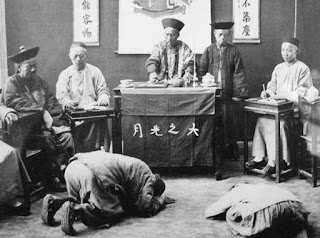 Even before the election I had noticed that Trump has a strong desire to force others to humiliate and debase themselves before him. Kellyanne Conway (aka: Ilsa, She Wolf of the SS) has openly advised White House employees that their first priority is to display "deference and humility" before the Dear Leader with the realization that he is a superior creation with no peer on Earth. 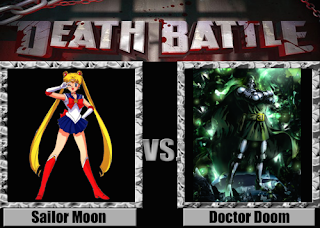 Trump wanted to watch Reince Priebus and Tony the Mooch fight it out in public for his amusement. Trump was reportedly angered that Reince didn't put up a more entertaining fight. This reminds me of the story of the Louisiana teachers who forced their students to fight each other.
Helter-Skelter 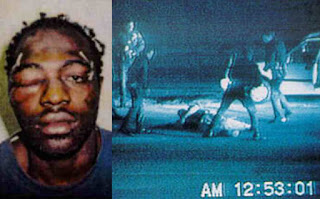 Donald Trump wants to finish what Charlie Manson started. If you don't remember the police beating of Rodney Scott, the acquittal of the gang of cops by an all white jury, and the riots that followed, it was an event that changed the concept of policing. While there are still rogue officers beating and killing innocent suspects, it is not (yet) the common occurrence of 1991. Treating suspects with respect is taught, if not always followed.

Then there was the motive of Manson's murder spree in 1969 - to provoke race riots that would reduced society to chaos allowing Manson to rise up as the savior. Trump's call for police to routinely rough up suspects, innocent and guilty alike, will create the chaos that will allow cancers like Trump and Steve Bannon to metastasize.
Posted by knighterrant at 2:29 PM No comments: Links to this post


What I want to do is I want to fucking kill all the leakers. ~ hitman Scaramucci

For comparison, here is a wiretap of Mafia Don John Gotti.

It's only a matter of time before corpses start appearing floating down the Potomac River.
Posted by knighterrant at 5:03 PM No comments: Links to this post

Numbers to Blow Your Mind

Space is big. Really big. You just won't believe how vastly, hugely, mind-bogglingly big it is. I mean, you may think it's a long way down the road to the chemist, but that's just peanuts to space. ~ Hitchhiker's Guide to the Galaxy

Seven Octillion (7x1027)
This is the number of atoms in the human body. 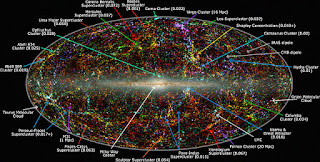 A Googol is ten to the power of 100, one followed by 100 zeros. For perspective, there are about 1080 atoms in the entire universe. So a Googol would be the number of atoms in one hundred quintillion universes.

8604 Years
Tony Padilla is Lecturer in Physics at the University of Nottingham in England. As an exercise for Numberphile, he calculated the number of years it would take for humans to consume every available atom in the universe. At our present rate of population growth, by the year 10621, there would be no atoms left to make stars or bunnies as every atom in the entire universe will be dedicated to the two sexdecillion humans squeezed into the cosmos. Birth control, maybe?


When you are put into the Vortex you are given just one momentary glimpse of the entire unimaginable infinity of creation, and somewhere in it there's a tiny little speck, a microscopic dot on a microscopic dot, which says, "You are here." ~ Hitchhiker's Guide to the Galaxy


Graham's Number
This number makes a Googol look like a speck of dust on a universe of universes. Graham's number describes connectivity in multidimensional hypercubes and if you want to know more get a doctorate in mathematics. It is impossible to imagine the size of this number.

If you wrote googol digits on an atom and filled the universe with a googol of such inscribed atoms and did it again with a googol number of universes you still wouldn't be close to writing down the full length of the number. Yet it is a real number and they know that the final digit of the number is a 7.
Posted by knighterrant at 9:31 PM No comments: Links to this post

Trump's fear for himself and his family is not the Russia probe, per se, it is all the financial scams they have engaged in during the years, especially the money laundering they have done for Russian mobsters. Hence he is considering a blanket pardon for the entire Trump Klan for all their various crimes. There are problems with this plan, of course.
Then there is blowing up a bomb in the whole concept of the rule of law, ripping the blindfold off of Lady Justice, poking her in the eyes, then dragging her out back and raping her.

Posted by knighterrant at 12:11 PM No comments: Links to this post

Is Jared Kushner the Anti-Christ?

This thought came to me when some news show pictured Kushner's New York office tower at 666 Fifth Ave. 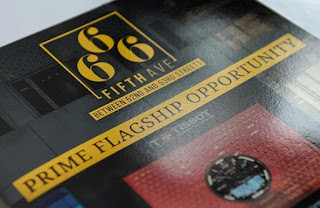 666, of course, is the Number of the Beast in the Bible. He has been gifted the portfolio of Mid-East peace negotiator which is exactly where the battlefield of Armageddon is located. Then there is the undeniable fact that Jared looks an awful lot like Damien in the Omen III. 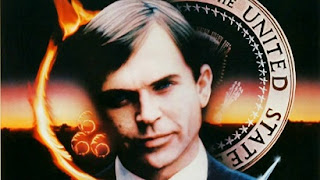 Compared to the number of fundamentalists (nearly all of them) who stated categorically that President Obama was the Anti-Christ, very few are suggesting Jared is the spaw..n of Satan.

I don't believe any of that claptrap, it is enough for me that he is a conspiratorial asshole.

For a good discussion of 666, this video is from one of my favorite YouTube channels, Numberphile.

Posted by knighterrant at 11:01 AM No comments: Links to this post

They are not a majority, yet, but a substantial minority of the US population are enthralled in the Cult of Trump. They are bewildering to those of us retaining our sanity.

They bleat out whatever talking point is presented to them by Trump as if it were their own thoughts. For months they chanted "fake news" at any evidence of Trump collusion with Russia yet when presented with Junior's admission of collusion they immediately switch to a "nothing burger" mantra where everybody colludes and collusion with a longtime enemy is a good thing.

Anyone who has read George Orwell's 1984 will recognize the radical yet immediate and seamless shift in mobthought. It is impossible for those of us practiced in critical thinking to imagine how a human brain could operate like that. Don't they remember what they believed last week?

This is a phenomenon I've never seen before in the United States. I see it but I do not understand it.
Posted by knighterrant at 10:36 AM 1 comment: Links to this post

The Most Disingenuous Story Ever Told

The months long denial by Trump of his campaign's collusion with Russian agents has now been proven to be a lie.  The new story is that there was attempted collusion of campaign officials to attack Hillary Clinton, but it turned into baby adoption collusion. Really?

Three top campaign people, Trump Jr., son-in-law Jared Kushner, and campaign manager Paul Manafort take time out of their busy schedules to hold a meeting with a lawyer with close ties to Putin on the advice of the son of a Russian oligarch with even closer ties to Putin. Junior was hoping for election collusion with Russia while the other two were just ignorantly tagging along. Junior says he left disappointed when the collusion meeting turned to babies.

That's their story! Junior tried to collude but failed, Kushner is an ignorant dope, and Manafort wasn't listening.

In my life I have never heard a more laughably improbable story. I expect better out of the Three Stooges.
Posted by knighterrant at 8:40 AM No comments: Links to this post


Russian mobsters call it Krysha, in the English speaking world it is known as the "protection racket." During the election and after, Jared Kushner tried to shake down Qatar, strong arming a Qatari billionaire into giving him a $500 million "investment" in his business.

The Qatari eventually refused. Shortly afterwards Trump publicly denounced the tiny nation of Qatar, sending them into a crisis and crashing the Qatari stock market. It was the international equivalent of  throwing bricks through their windows and roughing up a few employees. Like any ruthless New York gangster, Kushner needed to punish Qatar for disrespecting him and also teach a lesson to any other countries that might resist his extortion.

It may be crude, but extortion, as we have seen, is Trump's favorite strategy. Also China, Cuba and, of course, NATO. What Trump says and does makes a lot more sense if you accept as true that the White House is now run by Vincent Gigante.
Posted by knighterrant at 2:33 PM No comments: Links to this post

I was ten years old during the Cuban Missile Crisis. I most clearly remember the duck and cover drills we had to do in school 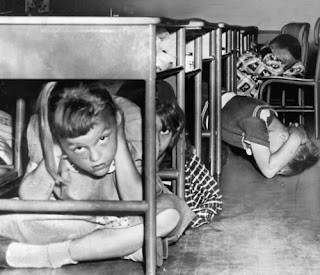 and having existentialist discussions during our elementary school lunches about how silly hiding under a desk would be in the event of a nuclear holocaust. The threat of imminent doom will turn even young children into Sartrean philosophers.

Only very much later did I learn that the Pentagon strongly argued in favor of extensive bombing of Cuba followed by a full scale invasion (OPLAN 316). That would have certainly led to Russian tanks moving into West Berlin and the beginning of World War III.

Pacifists, like Jean-Paul Sartre, argued that the proper course was to do nothing. Even Secretary of Defense Robert McNamara argued that a handful of missiles in Cuba did not change the balance of power and that doing nothing was better than doing something stupid.

President Kennedy wisely chose the aggressively peaceful solution of a total naval blockade of Cuba while negotiating with Russia to withdraw the American nuclear missiles that had been placed in Turkey a year earlier in exchange for Russia removing the Cuban missiles. 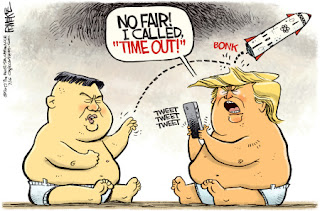 As far as anything can be deduced, President Twitter's "plan" for North Korea having missiles able to reach parts of the US is to vaguely threaten a trade war with China. This is an empty threat partly because it is directed towards the wrong country and it will never happen if only because the Trump family has extensive investments in China.


Like with the Cuban Missile Crisis, there are no easy solutions to North Korea or they would have been done years ago. A shooting war would lead to millions of deaths on both sides of the 38th parallel. It would take a total mobilization of the US military with extensive conscription of civilians to confront North Korea's seven million man army. And there is not another nation on Earth, perhaps not even South Korea, that would join us in the fight.

This is a subject that requires calm and rational counsel, nuanced negotiations, and probably using concessions instead of more threats.

Who thinks Trump is capable of any of that?
Posted by knighterrant at 1:17 PM 1 comment: Links to this post