Pundit Glenn Harlen Reynolds loves this country or, more accurately, loves to fuck with this country. He love this country so much he wants to scrap the constitution and write a new one. He believes the biggest problem facing the United States is that the majority of Americans don't think exactly like him.

He's come up with a solution which I'm certain he will write into his new, improved constitution. Require people pass a Patriotism Test before they are allowed to vote. He contends that Obama was elected president by unpatriotic citizens. His solution to prevent such a horror from ever reoccurring is to prevent unpatriotic Americans from voting at all.

He references a work of fiction where "the right to vote came only after some kind of dangerous public service." Oddly, by this rule Reynold himself would be disenfranchised as in his life he has never served the public in any way, dangerous or passive. So, I suspect when Reynolds writes that constitutional clause he will use the 1918 Soviet Union constitution as a template. In that constitution, only members of the Communist Party were allowed to vote, thereby excluding unpatriotic democrats.

At the risk of giving Reynolds ideas, he might find subsequent versions of the Soviet constitution more to his liking. They granted universal suffrage but all candidates had to be nominated from patriotic branches of the Communist Party. This insured that no matter how unpatriotic the electorate was they were required to elect only Communist patriots.  I'm sure Reynolds could draft a text that requires all nominees be approved by the Tea Party.
Posted by knighterrant at 11:13 AM 1 comment:

I don't care if the snow is piled higher than an elephant's eye in Boston. Spring has sprung in drought torn California.
Really, we'll take every flake.
There is another traditional sign of Spring, too.

The first Republican urging dropping nuclear bombs on someone.  Just like the swallows returning to Capistrano, you know its Spring when Republicans emerge from their Winter homes to declare the desperate need to nuke somebody. From Douglas MacArthur in Korea to Curtis LeMay in Vietnam, Republicans have always seen Spring as the season to allow a hundred mushroom clouds to bloom. Last year, the goal was nuking Iran. This year, the call is to nuke Iraq (like we haven't done enough to that country). Next year, who knows? It is one of the mysteries of the season.
Posted by knighterrant at 8:47 AM No comments:

Looking Into a Republican Soul

Republicans have a clear moral compass when choosing their political heroes. They love...

Candidates dumber than a kumquat as long as they act on their hatred of higher education.
Judges with total contempt for courts, other judges, and the law particularly when that contempt is used to attack people they hate.

Politicians who believe it is better to die quickly in abject poverty than to live with disabilities.

Candidates incapable of hire a competent campaign staff because than means they will be great presidents.

Judges who believe that innocence is no defense and that there is nothing unconstitutional about executing an innocent man.

Politicians who believe the earth is 6000 years old because that means they are gullible enough to swallow anything lobbyists tell them.

Candidates who believe that people would rather have no health insurance at all than have the chance to buy affordable health care.
Anyone who shoots an unarmed black youth.
Posted by knighterrant at 9:51 AM No comments:

One of the funniest things this month is the movement to award the nation's highest award for valor to Chris Kyle because his "life" was the subject of a movie. The medal criteria, "distinguished himself conspicuously by gallantry and intrepidity at the risk of his life above and beyond the call of duty," is extreme and there is no evidence that Kyle ever met any of those criteria.

Snipers are not conspicuous. They hunt their prey steathfully from great distances and the only ones who have even put their lives at risk did so because they are bad at their job. All accounts are that Kyle was a very good sniper, meaning he was not a gallant risk-taker.

However, if we are going to start awarding medals to characters in movies, there are several who should be in line ahead of Kyle. 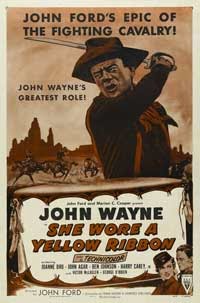 At great personal risk he entered the enemy camp to negotiate peace. When that failed he personally lead a raid to scatter the enemy's horses thereby preventing further hostilities and lose of life. 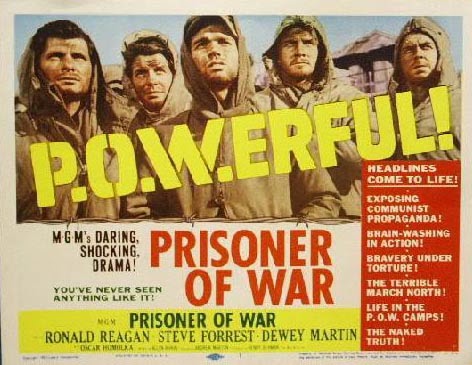 Finally giving Ronald Reagan the Medal of Honor conservatives believe he so richly deserves. At great personal risk, Capt. Sloane goes undercover as a POW during the Korean War to uncover harsh treatment given prisoners like waterboarding, mock executions, and other tortures. One of the worst movies of the 1950's. 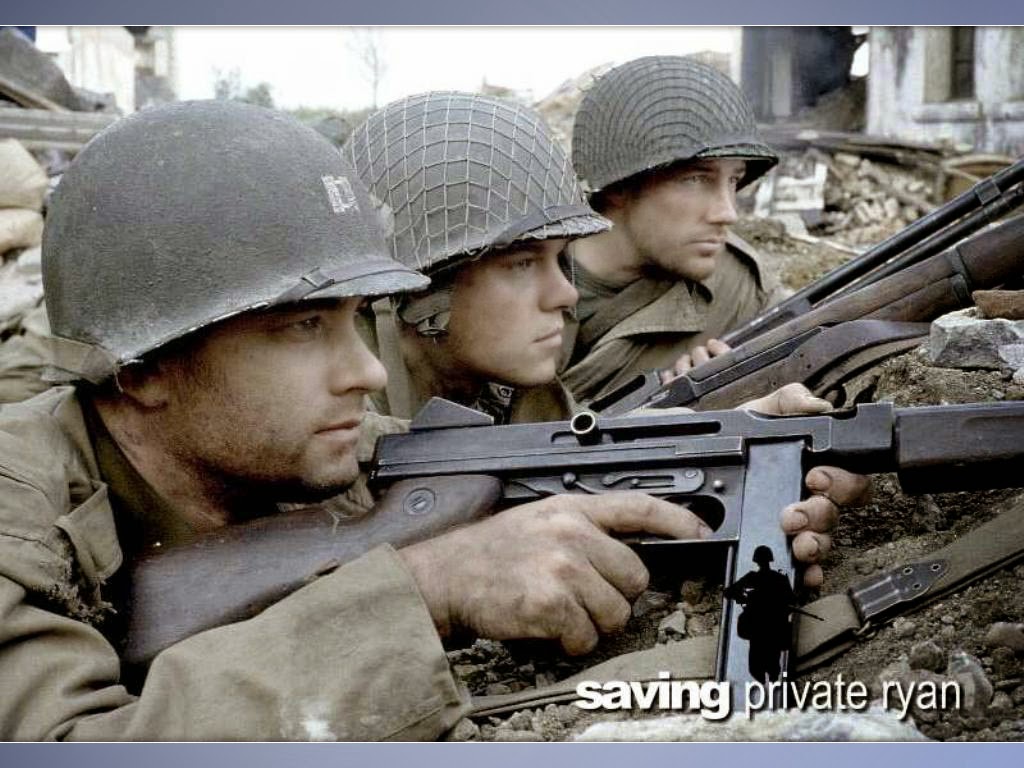 Gallantly risk the lives of an entire squad of soldiers in an insane search for one soldier missing in action among the 1.3 million Allied soldiers involved in the Normandy invasion. Most of the squad dies heroically.

Query: What is it about movies that most of the heroic soldiers are captains?
Posted by knighterrant at 11:24 AM No comments:

This February celebration began as a pagan holiday when people ran around naked to urge an early end to winter. It's got more boring with time. 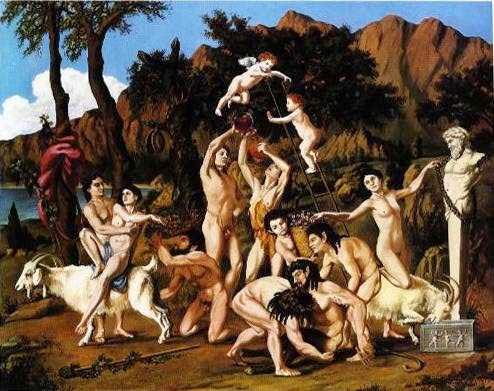 The earliest celebrations were called Februa and later Lupercalia.  Februa was when the shepherds would give themselves their first real baths of the year. Getting naked for washing in a purification ritual just sort of naturally evolved into a randy party in honor of that randy god, Pan. The Romans added a reference to the cave Lupercal where a wolf had raised Romulus and Remus but kept the party atmosphere dressed only in a goatskin loincloth. 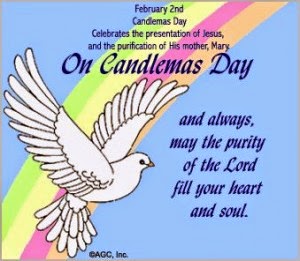 As always, when Christians came to power they saw a popular holiday where everybody had fun and they hated it. But, Romans were used to a purification celebration in early February so early Christians simply rebranded it. They chose an obscure biblical event when a priest and a prophetess spotted the baby Jesus and recognized him as the Messiah and applied it to February 2. They kept the purification theme but replaced the loinclothes with candles (not like that, you pervert). Dancing about nearly naked was replaced with slowly walking around, fully clothed, holding candles in solemn reverence. 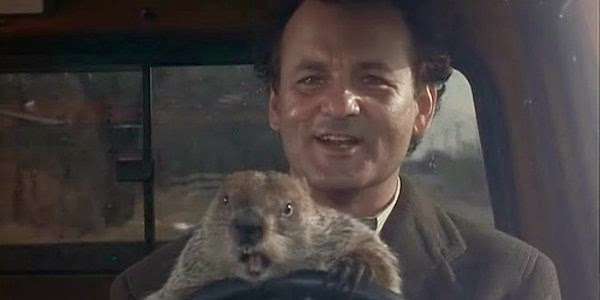 In the cold of Northern Europe, February 2 was also the traditional day when bears and other hibernating mammals, like groundhogs, would rouse themselves from their winter's sleep to take a look around. If it was bright and sunny (and cold) they'd conclude that winter wasn't through and go back to bed for a brief, six week, nap. If, however, it was miserable and raining they knew that the snow was done for the season and it was time to get up. When Christianity came to Germany they never could reconcile parading around with candles and the cold, furry animal tradition. Candlemas became a forgotten holy day in the Protestant calendar while the Germanic tradition lived on as Groundhog Day.

Then Bill Murray made the perfect movie and time stopped.
Posted by knighterrant at 1:07 PM No comments: