War and the Professional Soldier 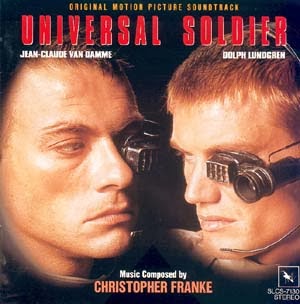 The Afghan War is the most unpopular war in American history, which is saying a lot since the competition includes the Iraq and Vietnam wars. Yet there are no street protests, no politicians campaigning against it. Ask anyone and they will tell you it's a worthless waste of resources spent on a worthless patch of land. Still, it continues. The only people who see value in the Afghan War is the professional warrior class. For them it is an opportunity to experiment with technology and tactics and, most importantly, the path to career advancement.

The "all volunteer" army is a misnomer. They are not volunteers but paid professionals. Professionals who need wars in the same ways that auto mechanics need cars and football players need football games. It doesn't matter if the war is objectively stupid, most wars are. They can't be sitting around on they tanks waiting for a morally justified, necessary war. Those are rare; the last for America was World War II. These professionals need to exercise their craft. If the Afghan War did not exist they would need to invent it.

I believe the only thing preventing America going to war with Iran or Syria is the outlet provided for our professional warrior class in Afghanistan. Take that away and the inertia for a replacement war to justify our professional soldiers will become overwhelming. Iran is the likely target, although they may be afraid that Iran will be too able to defend itself and seek an easier victim like Venezuela.

The Founding Fathers were afraid of standing armies and preferred citizen soldiers who would only go to war as needed. Standing armies might be better fighters but their usefulness is outstripped by the dangers they create. Professional soldiers, like ours, tend to separate themselves from the common citizens, living in their own communities and sharing little in common with the nation the allegedly serve. They view us, at best, as obstacles to a smoothly run war. At worst, they see us as pansies and appeasers who refuse to see the absolute necessity of war and the terrifying dangers of peace.

As for us civilians. We have come to view our professional soldiers as convenient toys for our politicians. They can play at war without bothering the citizenship at large. We see our professional soldiers as faceless cannon fodder who will quietly fight the wars we don't give a shit about and not bother us with the petty details like their lives and deaths. Most important, we want our soldiers to behave professionally and not be distracted by moral questions like citizen soldiers are prone to. We want our soldiers to kill professionally, without conscious.
Posted by knighterrant at 9:14 AM No comments:

Who Cares About Duck Dynasty?

I was briefly Duck Dynasty curious when I thought it might be a new Disney or Warner Brothers cartoon series. I quickly lost interest when I found out it was another "reality" show about inbred yokels who use high powered weapons to slaughter birds. (Aside: A TV show where people hunt water fowl using hand-made bows and arrows, then I might be interested.)

The purpose of the freak sideshow is to put truly pathetic people on display so the rest of us can believe our miserable lives are, at least, better than theirs. Nineteenth century circuses would display people with hideous birth defects or disgusting habits for the enjoyment of others. In England, families would day trip to the Bedlam insane asylum for an entertaining outing. Christmas was a favorite time to view the caged crazy people.

Apparently there is something of an uproar because the head freak of Duck Dynasty said something outrageous and entirely within character but outside the confines of the show. It was like a sideshow geek biting off the head of a chicken on a public street. Some people were disgusted by this public display of freakiness. Others are defending him because he has a constitutional right to be a disgusting freak or their share his perversions. The freaky has gotten so freaky some believe that Duck Dynasty will affect senatorial election results in Louisiana and Texas.


Who's the bigger fool, the fool or the fool who follows him? ~ Obi Wan Kenobi

Posted by knighterrant at 10:13 AM No comments:

Searching for the Real Santa

Megyn Kelly (one of the FOXNews strippers) started a mini-firestorm when she declared that Santa Claus is real and white. Which begs the question, who is this Santa Claus person, anyway? 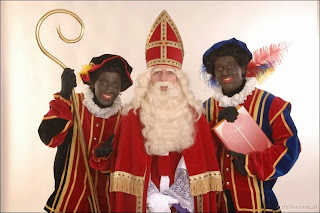 Santa Claus is an Anglicization of the dutch word Sinterklass, or Saint Nicholas, the patron saint of Holland. His companion servants are not elves but Zwarte Piet (Black Pete) who spy on children and report back to their boss about whether they are bad or good. Sinterklaas has a flying horse, not reindeer, and passes out chocolate letters to good children. This is remarkably similar to the old Norse god Odin and he is pictured looking like Odin.

Saint Nicholas of Myra was a tiny, five foot tall, olive complexioned Greek from what is now southern Turkey.  The historic Nicholas was just another 4th century bishop, lots of them ended up being sanctified, who was known for being annoyingly pious. His one known accomplishment was being one of the 300 bishops to attend the First Council of Nicaea. Legend give him more credit. He is said to have resurrected three small children murdered by a butcher. His gift giving legend comes from a story where Nick threw bags of gold down a chimney into a home so a father would not have to sell his three young daughters into prostitution. Nick is the patron saint of children, sailors, and (yes, Megyn) broadcasters. 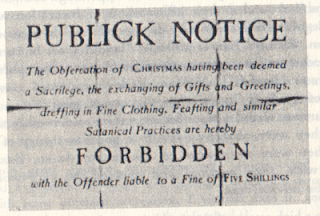 By the 17th century the notion of a generous, jolly, bearded old guy personifying Christmas had migrated from Holland to England. This was a time when there was a genuine war of Christmas. The Royalists were decidedly pro-Christmas while the Puritans were anti-Christmas - Christmas was seen as a fun holiday and Puritans considered anything fun to be pure evil. Celebrating Christmas became an act of rebellion against the rule of Oliver Cromwell who had officially banned Christmas. Father Christmas is supposed to live in northern Finland, hence the reindeer now added to the legend.

Kris Kringle
From the German Christkindl, Christ child, somehow converted into an Odin-like old man because, damned if I know. 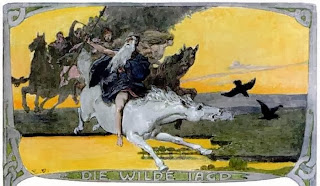 In the winter Odin and his son Thor disguised themselves as Jolnir and Longbeard to go hunting during the Winter Soltice. Odin mounted his flying horse while Thor drove a flying wagon pulled by goats. Centuries later Christians tried to reconcile these exciting stories with the birth of the Christ child by adding in an obscure Greek bishop and in a true Christmas miracle, Santa Claus was born.
Posted by knighterrant at 10:45 AM 1 comment:

Big Brother Is Looking At You In Your Underwear 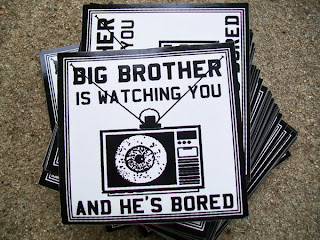 I'm not surprised that our professional government voyeurs have developed the technology to surreptitiously turn on your computer webcam. And, of course, they will claim they only do it in case of terrorism or serious crime (or if she's really hot).  It doesn't strike me as a useful bit of surveillance if your are looking for evidence of criminal activity. Webcams are seldom positioned to pick up panoramic views of bomb factories. Generally all they can see is the torso of the typist and a bit of the wall behind her.

If you are a real criminal (and not an exhibitionist teen) this government technology is easily thwarted with a little bit of duct tape.

World War II was chock-a-block full of atrocities. Many of them, frankly, nastier than the sneak attack on Pearl Harbor.

The "Night of Broken Glass" was the the worst pogrom in Jewish history. It was not the first assault on Jews by Nazi thugs but it was the day the actual Holocaust began. On that night across the whole of Germany over 7500 Jewish business were destroyed and 200 synagogues attacked. Officially, 91 Jews were murdered but hundreds more Jewish deaths were officially labeled as suicides. Of course, Jews were blamed for the anti-Jewish riots. The Jewish community was fined one billion reichsmarks (about $5.5 billion current US) to compensate the Nazi for the expense of destroying their property. Over 30,000 Jews were arrested and shipped to concentration camps. 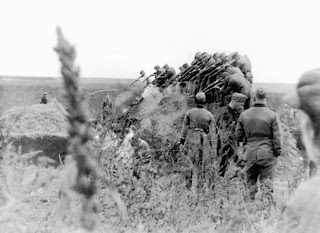 As the German blitzkrieg raced across the Ukraine in the fall of 1941 there was little to slow them down. One thing the Nazis always had time for was to stop and slaughter local residents. Babi Yar is a ravine near Kiev. The Jewish population of Kiev was brought to Babi Yar, herded into the ravine, and shot. All 33,000 of them. Similar massacres were performed throughout the Soviet Union. The victims were also Gypsies, communists, and Russian POWs.

By the last year of the war there wasn't much left of military value left to bomb. But military commanders had plenty of bombers and bombs and needed to do something with them. So it was that RAF commander "Bomber" Harris set his sights on Dresden. One of the most culturally significant cities in Europe with no military significance, Dresden had become a gathering place of refugees fleeing the advancing Russian army. Ostensibly attacking Dresden's communications infrastructure, the raid mostly avoided bridges and rail lines and instead targeted the civilian population of the city center with almost 8 million pounds of mostly incendiary explosives. The resulting firestorm burned for days and killed some 25,000 non-combatants and zero combatants. 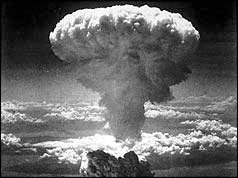 I'm of the opinion that the atomic bombing of Hiroshima was a necessary, if obscene, act of war that prevented the need for a ground invasion of the Japanese home islands and the millions of casualties that would have resulted. The second atomic bombing was unnecessary and gratuitous. The only reason we dropped it was because we had a second bomb. There was not enough time (just three days) for the Japanese high command to consider the consequences of this new, terrible weapon. The Japanese surrendered five days after Nagasaki.
Posted by knighterrant at 9:48 AM No comments:

And This Is Why Iran Should Want Nukes

Duncan Hunter is my congressman. Please don't think less of me. Before him, his daddy held the seat. Between them, father and son, they have held a congressional seat for nearly a third of a century. Theirs is not a dynasty by any stretch, it's more like a petty fiefdom.

Daddy, in his career, never accomplished anything other than almost getting his hand caught in the cookie jar. Daddy Duncan took money from the same corrupt defense contractors as felon Congressman Duke Cunningham. He just wasn't as stupid and didn't leave a bribery price list lying around for prosecutors to find. Daddy Duncan even ran for president once, not for any political purpose but purely as a way to collect legal bribes. By accounts, kiddy Duncan is following in his father's corrupt footsteps and, like father, except for his extensive corruption, kiddy Duncan has accomplished nothing at all in office.

Which all makes me wonder why kiddy Duncan has come out advocating a nuclear attack on Iran. It almost certainly has something to do with defense appropriations. Kiddy Duncan probably is being paid a pretty penny to channel multiple billions of dollars into a new nuclear weapons program (I'm guessing a new design of tactical nukes that can be fitted on drone aircraft) and needs to gin up some casus belli to justify such an utter and complete waste of money.

Kiddy Duncan, like daddy Duncan before him, doesn't give a fuck about the country or servicemen or balancing the federal budget. He would love a nice expensive war because that's where the really big legal bribes are found. Both Hunters are just low-class grifters who found himself a sweat scam.


Posted by knighterrant at 2:51 PM No comments: