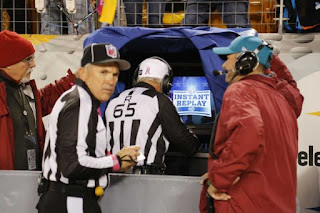 No touchdown, no home run, no goal, no great catch or impossible shot is legitimate until it has been subjected to official review. I understand the intention is to "get every call right" but the result is to drain the electricity from an athletic event. All the excitement grinds to a stop as the referees stop everything so they can watch a little television.

Football, of course, is the worst offender but baseball and ice hockey are catching up. Basketball and soccer are still mostly immune from this contamination.

Every sport suffers from this epidemic, although pro football is the worst. At best the players just look like a fool like when Odell Beckham acted like a dog peeing on the field after a touchdown reception. Then there are the athletes who injure themselves celebrating. In addition to the ones in the clips above there was golfer Thomas Levet who broke his leg celebrating winning the French Open and Indian soccer player Peter Biaksangzuala who died after breaking his neck doing a backflip after a scoring goal.

There is a classic quote in football attributed to several players and coaches, "When you go into the end zone, act like you've been there before."

The Student-Athlete Lie
This one dates back to well before I was born. Colleges started paying people to play sports for them back in the 1870's and even then they found ways to disguise the payments as charity and entered them into non-degree programs so studying wouldn't interfere with their athletic duties. Basically, these dodges are still used today.

Besides the phony "paper classes" described in the links, the scholarship system is constructed to treat the athletes as indentured servants. High schoolers are required to sign "letters of intent" binding them to a university while the university can cancel their scholarship offer at any time up to the first day of class. Even four year scholarships can be withdrawn for any reason such as a career ending injury or the coach recruiting a better running back. The promise of a college education is hollow.

Publicly Funded Arenas
No politician knows how to steal from taxpayers like billionaire sports team owners. Thanks to a corrupt deal made by then Mayor Rudy Guiliani, the city and state of New York was stuck with a $1.2 billion bill for constructing a new stadium for the Yankees and an additional $600 million for the Mets new digs. The Yankees are the second richest franchise in sports and could easily have afforded to built the stadium without ripping off the public.

Across the country, sports teams are blackmailing cities with threats to move elsewhere if they don't get gold-plated pleasure domes. While the extortion is almost always rejected by the public if they get to vote on the matter, like in San Diego last year, local politicians are easy marks willing to open the municipal coffers so they can continue getting autographed photos of star athletes.
Posted by knighterrant at 3:55 PM No comments: Links to this post 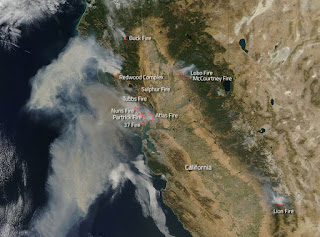 If Trump thinks about it (okay, tall order) he will have a quandary over how to feel about the deadly California wildfires.

California voted overwhelmingly for Hillery Clinton, but
The parts on fire voted for Trump.

Breitbartians and their ilk like to call the state the People's Republic of California, but
Many of the fires are in the portion of California that wants to break away and form the Free State of Jefferson.

California is proudly multicultural, but unlike Houston, south Florida, Puerto Rico, and the Virgin Islands
The fires victims are mostly white, Trump's people.

Caring about the fire victims requires empathy, a trait Trump long ago purged from his withered soul as part of his contract with Satan. I expect Trump will resolve the dilemma the way he does with all human suffering, figuring out how he and his buddies can profit financially from their pain.
Posted by knighterrant at 9:07 AM No comments: Links to this post


The Daily Beast has precisely described how I've been feeling the last couple of weeks. The neverending displays of presidential juvenility, the wanton neglect of Americans living in Puerto Rico and the Virgin Islands (the forgotten disaster), the mainstreaming of open racism, and the reckless warmongering are so fucking tiresome.

I'm not depressed so much as fed-up. I'm fed-up with a president that daily displays a sociopath's capacity for compassion. A Veep who will waste a quarter of a million dollars on a cheap stunt. A cabinet loaded with grifters where the only sin is apologizing for stealing public money.

There is the Republican Congress possessed by a paralyzing fear of being caught doing or saying something intelligent or, God forbid, honest lest they be targeted by the fascist wing of their party.

Then there is the growth of American fascism itself. Race hatred is more open now than any time in the past half century. There is a longing for wars, not of conquest but wars of annihilation. Breitbart fascism is far from a majority in the United States but it is never the goal of fascists to be a majority. Their goal is to have a nation where everyone else is afraid to state a contrary opinion. Fear is the goal. Fear will keep everyone is line.
Posted by knighterrant at 12:05 PM No comments: Links to this post