My Top Five Posts Every

I deliberately haven't tried to find out whether anyone is reading this indulgence of mine. I consider it like posting my daily rants on the corner telephone pole to be read or ignored as people wish. Well, Blogger has added a Stats feature that, like it or not, tells me about my audience.

I have between 200 and 6oo page views a day. Now that doesn't mean readers. Many are probably spambots. Chances are most of the others just glance at the page, notice no pictures of Salma Hayek, and move on. 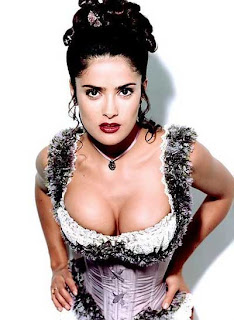 I just doubled by readership.
Most of my viewers come from the United States. No surprise since most of of friends and family are there. Interestingly, better than 10% are Dutch. I can't figure that out but, beste wensen, ya'll.

Posted by knighterrant at 9:29 AM

I have to admit Salma Hayek got my attention as I scanned the blog front page -- but, honest, I read the posts above it.

Perhaps bots should not be looked down upon; they have more redeeming qualities than some of the people/institutions you write about.