Class Warfare and Bank of America 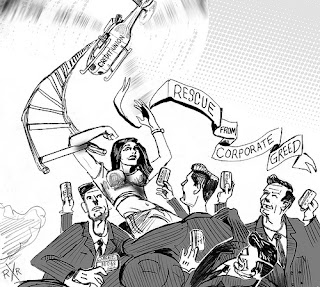 Bank of America is firing a volley in the one percent's continuing war against the rest of us.

BofA is instituting a $5 monthly fee for using a debit card. Of course, the fee will only be applied to regular accounts. Rich people with premium accounts are exempt and may use their debit cards for free. This is in addition to the fees they charge just to hold your money that the rich are also exempt from.

Go Galt, Middle Class, Go Credit Union
The best way to strike back is to withdraw your money and join a credit union. These non-profit coops have volunteer directors elected by depositors, not highly paid boards selected by the richest sloths for the richest sloths.

Then there are companies like this who are dedicated to seducing credit union boards of directors into converting their non-profit credit union into a for profit bank. The seduction is that the directors stand to make millions as depositors ownership of the coop is erased and replaced with investor purchased ownership.

The war on credit unions is part of the one percent's continuing class war on the rest of us.

Update: The Bank of America website crashed today in what is likely a people's uprising against them.
Posted by knighterrant at 9:06 AM