Not politics, just some fun history (guess what movie I watched last night). 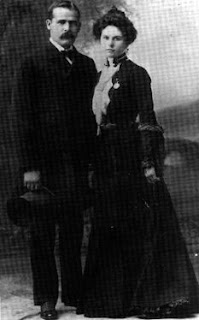 There is a lot more fiction about Etta Place than known facts. She was a teacher or prostitute or rancher born in Texas or Utah or New York. Her real name was Ethel or Eva or Anna....I give up. What is certain is this picture is of Etta Place. She traveled to New York in 1901 as Sundance's wife and with Butch and Sundance went to Patagonia where they owned a ranch. Pinkerton detectives traced alleged movements, they supposedly went to the St. Louis World's Fair in 1904. Truth or not, Etta Place disappears from history in 1905. 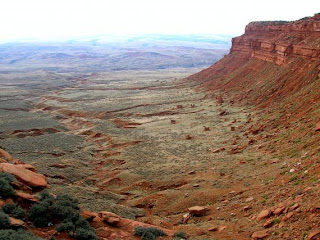 The notorious hideout for Butch and Sundance was named for the Hole-in-the-Wall Pass in remote Johnson County, Wyoming. There is only one way in or out and and anyone approaching the pass can be seen for miles. 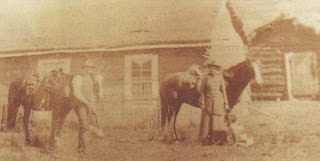 When Butch, Sundance, and Etta sailed from New York they traveled to Argentina. This photo is allegedly of Sundance and Etta outside their cabin along the Rio Tigra near Cholila, Argentina. The cabin is still standing and has become a tourist attraction.
Cholila butts up against the southern Andes and according to the Pinkerton Detective Agency, the three traveled frequently to Chile and Bolivia to commit robberies or hide out. Etta and Sundance were also supposedly tracked traveling back and forth to the United States several times.

It is fact that two yanqui bandits were killed in a shootout in San Vicente, Bolivia in 1908.
There will always be a question if those two were Butch and Sundance. A Pinkerton report claims the Sundance Kid was jailed in Peru in 1921. He would have been in his mid-50's. Butch Cassidy's family members claim Cassidy attended a family reunion in 1925.

Posted by knighterrant at 1:21 PM