Several centuries ago the Dutch bankrupted their country over tulips, now it is a mountain. The Netherlands is a notoriously flat, partially underwater country mostly known for windmills, dikes, and a kid with a thumb. But the Dutch always wanted to be Switzerland so they have decided to build a mile-high artificial mountain. 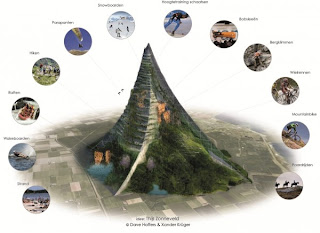 Currently the highest point in the Netherlands is in the Caribbean Sea (Mount Scenery on the island of Saba) at just 862 meters. In Europe, the highest spot is a hill at the tripoint of Belgium, Germany, and the Netherlands. But the Dutch have always wanted a real mountain that the can climb up, ski down, and jump off of. When a journalist wrote a joke about building a Dutch mountain complete with alpine villages the people decided it was a nifty idea. 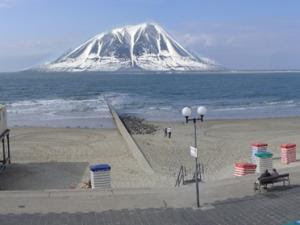 They still have plans to make. Do they want a Matterhorn-type mountain (top photo)? Another idea is a broader summit like Mont Blanc. Then there is the question of whether they want to build it on top of farmland or in the North Sea.

The cost is no obstacle. The estimate is $300 billion or about half of the Netherlands GDP.

Posted by knighterrant at 9:47 AM