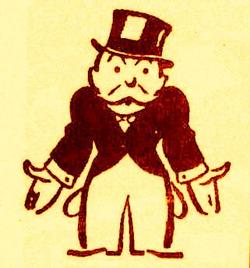 I know I'm old fashioned, but I remember a time when banks were where money went to hide. They had safes and ATMs and everything.

Sure, banks loaned out money, that's how they made money, by investing prudently. Banking wasn't an exciting profession, it was, in fact, a staid and boring job.

Somewhere down the line bankers started looking at all that money just lying around being secure and thought how much more fun they could have if they worked in a casino. Rather than quit Lehman Brothers and find a job at Bellagio they decided to turn their banks into betting parlors.

As any gambler knows smart casinos work like banks used to. They rig the games to insure a small, prudent, safe profit. At a casino, being the bank is the only safe bet. But that was too boring for the bank bankers, they didn't want to be casino bankers they wanted to be casino gamblers. In the United States, bankers went on a betting spree and lost their shirts. They then went crying to their rich Uncle Sam demanding he cover their debts.

European bankers saw the fun and decided to play too. Now we are witnessing again what once was impossible, the biggest banks don't have enough money for their day to day operations and nobody will loan them any money. Only Europe doesn't have any rich uncle to bail them out.
Posted by knighterrant at 8:55 AM

In the old days, banks were subject to strict limitations, directly as a consequence of the great depression, in order to ensure that customers' funds were protected. Now, it appears that customers' funds are not particularly relevant, and neither are the customers. The regulations worked very well, and, even during the communism scare from 1917 to the 1980s, those regulations were not looked at as the first step toward becoming the next USSR. The real thing that is bankrupt right now is good sense and policy toward banks. If people want to gamble money in markets, fine, but not the money of customers. Let them bet their own.