I could continue to the end of time detailing rogue corporations.
To name a few more. There are a plethora of corporations that can rightly be called psychopathic. They profit from behavior that go so far beyond callous as to become bloodthirsty. They kill and maim, destroy lives, livelihoods, and entire cultures with as little concern as they would have using a stapler. Sure, they may pay the occasional fine (normal business expense) but they never let a little thing like human life disrupt business. 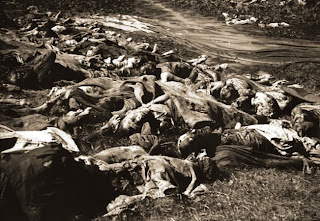 The corporate road to success.
In the United States they claim all the constitutional rights granted to "persons" while at the same time are granted immunity from laws governing individuals. Corporations like BP kill people, a crime that if committed by your or I would be punished with several decades in prison, and all they face are small (in relationship to their balance sheets) fines.

We are far more likely to be killed in the course of our work, or as a hapless customer of a commercial venture, than at the hands of criminals in society at large. ~ wsws.org

What is needed is a corporate death penalty. If a corporation commits heinous crimes against humanity or nature (manslaughter, destroying indigenous cultures) that company should be put to death. It assets (anywhere in the world) should be seized. The assets of the CEO, COO, and board of directors should be seized as well. The stock, worthless. The bonds, worthless. The company ought to be disappeared. Put to death. The execution ought to be swift but thorough. It is a power than will only need to be used once to scare the rest of the corporate world straight.

It will never happen. With the current US Supreme Court it is more likely BP would win a lawsuit against Louisiana fishermen for walking on BP oil then the fishermen would prevail for the destruction of their livelihoods. We have already seen the sick spectacle of the Coast Guard working as BP's public relations flack and its private police force.

In our modern world corporations are not "under God," they are God. Goldman Sachs can bankrupt entire countries. Shell Oil can destroy entire civilizations. British Petroleum can lay waste vast stretches of ocean. Union Carbide can kill multitudes silently in the night. All with impunity. What is more godlike?
Posted by knighterrant at 8:37 AM

A very illuminating (and, disgusting and disturbing) series. I knew some of this history, but not nearly all of it.

btw -- huge clouds of spruce pollen most of last month in Juneau. Yellow dust everywhere. Still hanging on all the plants because it's been a rather dry May.