British Petroleum has had a rough month so I will do this post without any with very few references to the Deepwater Horizon oil mess.

The Crimes of BP
Manslaughter 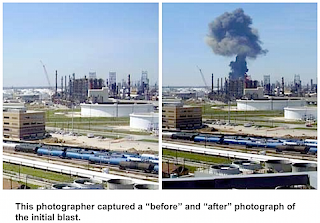 In 2005, a refinery in Texas City operated by British Petroleum was racked by fire and explosions. Sound familiar? Fifteen workers died (only eleven died in the Gulf of Mexico disaster), another 170 were wounded. The only reason the Texas City refinery didn't sink like Deepwater Horizon is that it was on dry land.

§ 19.04. MANSLAUGHTER. (a) A person commits an offense if he recklessly causes the death of an individual.
(b) An offense under this section is a felony of the second
degree. ~ Texas Penal Code

BP paid $20 million in fines for over 300 safety violations that led to the explosion and fire. They are paying out $50 million in criminal penalties. They have also been billed $1.6 billion is settlement payments to victims families (source). Last year BP made over $265 billion in revenue. All these fines and payments amount to less than three days revenue for the company.

Under Texas law fifteen counts of manslaughter ought to be punished by a minimum 30 years in prison. The trick to corporate crime is diffused responsibility. No one person is, specifically, to blame so no one gets punished. Sure, there are fines to be paid but when you are as large a company as British Petroleum any fine is still a pittance and likely smaller than routine bookkeeping errors.

PS: Manslaughter has also been mentioned by Firedoglake with the Gulf disaster.
Posted by knighterrant at 1:39 PM