It does seem there are a lot of oil companies that are corporate criminals. In large part this is due to the very nature of mineral extraction. It is not a long walk from rape of the earth to rape of humanity.

The Crimes of Shell
Genocide, Murder 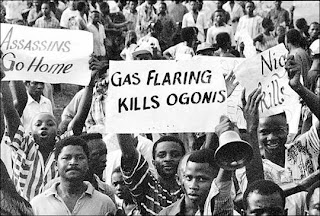 There is a shitload of oil in the Niger River delta. Unfortunately for the Ogoni people of Nigeria, they live in that delta and Shell wants that oil. Oil spills have polluted the once agriculturally rich land. Oil and gas fires make the air unbreathable. But if that was all, Shell would be level with British Petroleum.

Shell built a private army to wage war on the Ogoni people (Evidence). When Ken Saro-Wiwa became too outspoken and too famous worldwide, he and eight other Ogoni activists were lynched by the Nigerian government to the profit of Shell. It is impossible to understate what Shell has done in the Niger delta. The word genocide still understates. Of course, if you read Shell's website and it is all about greedy Ogoni wanting money.

In 2009 Royal Dutch Shell was ranked by Forbes as the biggest company in the world. They have annual revenue over $450 billion. That exceeds the GDP of Norway. Shell has the financial power to buy countries like Nigeria from the petty cash drawer. They can also buy good publicity. Fortune magazine unbelievably ranks Shell as the sixth most "Accountable" corporation.

Here is a list of Shell's social accountability:
To companies like Shell, BP, and Union Carbide people's lives are merely an annoying nuisance.
Posted by knighterrant at 9:00 AM