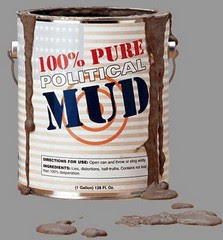 My father, who was born when Howard Taft was president, has been predicting all year that this will be the dirtiest campaign in his life. McCain is on the wrong side of the facts, the issues, and political momentum. All he has left is flinging filth.

He's Black: In each new ad McCain runs Barack Obama's face will get darker and darker while at the same time accusing Obama of playing the race card. McCain will make every effort to remind voters that Obama is black, a Negro, a goddamn uppity n****r.

Religion: When not accusing Obama of being Muslim McCain will attack him for the Christian church he attended. It being a black church, a goddamn uppity n****r church. Besides, he's really the Anti-Christ.

The plus side for Senator Obama is that voters have been exposed to these smears and lies for over a year now. A certain immunity has set in. Besides, the best attack ads are actually true and speak to the current condition of the nation. And that puts a target directly between McCain's eyes.

Keating Five: The last time the United States suffered a collapse of its financial system due to corruption and greed was the savings and loan scandal in the 1980's. One of the principle corrupt politicians at the time was John McCain.
Posted by knighterrant at 7:11 AM