Like Fox Mulder on the X-Files, I want to believe. Unfortunately, the evidence is very weak.

Most of the photographic evidence is obviously fake or just as obviously optical illusions. One of the easy keys to a fake is that the real things in the photo are blurry too. 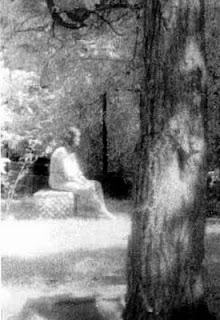 For example, this photo taken in a cemetery outside Chicago in 1991 is considered one of the best ghost photos around. However the very real stone slab the ghost is sitting on is as ethereal as the ghost. Granted, ghosts rarely show up under studio lighting for a photo shoot. Most modern images are taken in the dark using infrared light. Still, if you are going to modify a photo using computers or an air brush, it is easier if the image is already muddy.

The illusion called matrixing where people see faces where none exist is responsible for people seeing Jesus on a burned fish stick, a monkey-faced monument on Mars, and dead sailors in roiling sea foam. 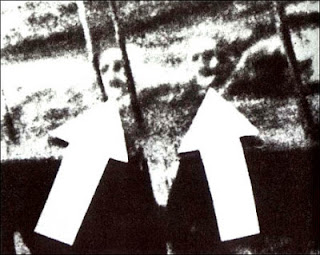 Even very believable photos can turn out to be fake. A photo taken of the Wem Town Hall in Shropshire, England as it was burning in a fire showed a ghostly little girl standing by a railing. 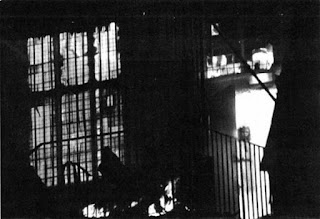 She's not centered in the frame (unseen spirits appearing in the middle of a photo is another dead, so to speak, giveaway of a fake) and she looks spectrally genuine. But research shows it was only an elaborate hoax.

But I still want to believe. I'm not sure of the deep psychological reasons for wanting to believe in ghosts because it's not like I plan to hang around after death whispering in people's ears at midnight. Or worse, have Zach Bagins taunting my afterlife, that would truly be hell.

Don't get me started on UFOs.
Posted by knighterrant at 2:58 PM

"Very weak" is really overstating the strength of the case. The best you can say is that the case for ghosts is stronger than it is for the truth of any religion. Suffice to say that I have no interest in believing in either one of them as I think it would suggest that I am losing a grip as well as losing any confidence that people have anything within themselves to act good, because they depend on some outside force to compel them to do so ... an outside force that considers people to be inherently evil.