More on the Rapture
If the Rapture happened, the only American called up was professional wrestler Randy "Macho Man" Savage. The only section of America to suffer the Tribulation is the Bible Belt. They are getting tornadoes, historic flooding, and Newt Gingrich. On the other hand, it's sunny in San Francisco. 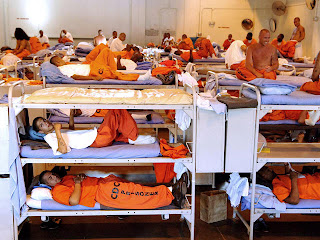 California has a prison population of about 156,000 (about the size of the city of Salinas). In 1980 the state had 28,000 prisoners. The prisoners are crowded into facilities built to house 80,000. In his dissent, Justice Scalia denounced the Eighth Amendment to the Constitution as a "travesty of justice" while the inhuman crowding is justified because some of the prisoners are "fine physical specimens who have developed intimidating muscles pumping iron in the prison gym."

Prison Nation Perspective
When you add in parolees, the California Department of Corrections supervises nearly 300,000 Californians, the population of Stockton. California's prison budget is $9.8 billion, more than the entire state budget in 1973. Then there is the county jail system. Los Angeles County alone holds some 20,000 prisoners and some months average a suicide a day.
Posted by knighterrant at 5:08 PM