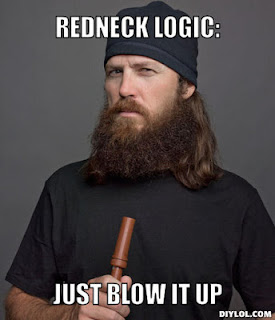 If you read conservative blogs, as I do, you will see the same phrase over and over in comments: "Just Blow It Up." The meaning is quite simple, if they can't own the country they intend to destroy it.

Boehner and the other House Republicans have abandoned any pretense of negotiating or even voting on any legislation whatsoever involving budget, taxes, or debt. Boehner refuses to bring anything to a vote unless it has unanimous Republican support, an impossible goal given the radical wing of the caucus.

It is exactly like the petulant child who grabs the ball and runs home in tears because the other kids won't let him be quarterback. House Republicans have run home and are now hiding in their bedrooms pouting.

It is their intention, as far as people this infantile can have intentions, is to punish the country for being mean and not electing them to everything. If the economy craters, they believe, it is exactly what we deserve for being such doodyheads.

If President Obama is the nation's father figure then the House of Representatives is the bratty little brother who ruins every Christmas by throwing a temper tantrum.
Posted by knighterrant at 10:49 AM