The Plains states from Fargo to Austin are seeing a drought so severe the mighty Mississippi and Rio Grande are drying up. The Jersey Shore has had her hurricane. It is now the turn for the Leftcoast. 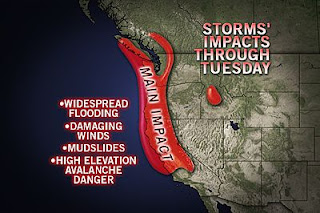 A series of major storms has set up what is being called an "atmospheric river" and is predicted to drop as much as a foot of rain on the Pacific coast from San Francisco to Seattle. Betcha a quarter some nut claims the resultant flooding is because of gay marriage.

Posted by knighterrant at 9:26 AM