Want to know what fascism looks like? This video from a California middle school cafeteria shows a large, white, shaved-headed security guard assaulting a 13 year-old black girl under cover of authority. The story is that the girl threw (or dropped) a piece of birthday cake on the floor. The guard ordered her to clean up her "nappy cake" and when she didn't respond to his liking the security guard "placed her under arrest" with sufficient force to break the child's arm.

We are not there yet, but we are closer than any of us would like to believe. For comparison, below is a photo of Nazis forcing Jews to clean a street in Austria. The only difference is that Americans have not yet learned to cower in terror from thugs wearing black shirts reading "security guard." 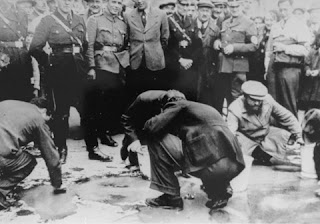 Posted by knighterrant at 1:29 AM