The Price of Slaves

A recent report lists the ten richest presidents in American history. It glosses over the fact that four of those ten were slave holders and a portion of their wealth was in human chattel. 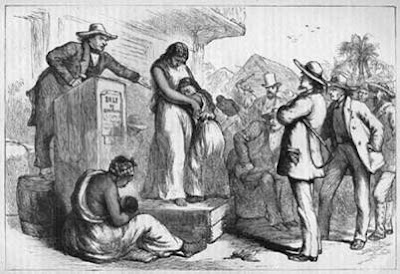 The value of a slave is difficult to pin down. Estate sale prices were bargains, about $400. Auction prices for a strong field hand could reach $1000 each. Prices fluctuated with the economy. Then, of course, we have to factor in inflation.

George Washington: Washington possessed 316 slaves at the time of his death, including 40 rentals. The value of Washington's human property probably exceeded $4 million in current dollars. Washington considered his human property lazy and gave his overseers written permission to whip them.

Thomas Jefferson: Jefferson was known for treating his slaves well including buying individuals just to keep families together. On the other hand, there are stories of abuse like a 17 year-old man who, on becoming ill, was flogged three times a day to force more work out of him. Jefferson generally owned in excess of 200 slaves valued at more than $3 million.

Andrew Jackson: Jackson own 150 slaves and was a slave breeder. In advertising for the return of a runaway slave, Jackson offered a $50 reward plus an addition $10 for every 100 lashes given the runaway. In current dollars Jackson slaves probably are valued at $2 million.

James Madison: In the 1820 census, Madison reported he owned 106 slaves. While Madison frequently wrote his opposition to slavery he never extended it to his actual life and even refused to free his slaves in his will. We can appraise his slaves at about $1.5 million.

When slaves were emancipated by Abraham Lincoln it is estimated the South lost $3.5 billion (in 1860 dollars) in assets. Adjusting for inflation that is $50 trillion in today's money.

The price of a slave today is considerably less. A health male slave in Mali will sell for just $40. The estimate is 27 million humans are held today as slaves around the world. The number of sex and labor slaves held in the United States today is estimated at about 10,000 people although it may be much higher. That doesn't count the more than 100,000 prison laborers in the United States earning as little as 17 cents per hour.
Posted by knighterrant at 10:56 AM

The legacy of our founding fathers that shows them to be somewhat less than the veritable gods some people imagine.