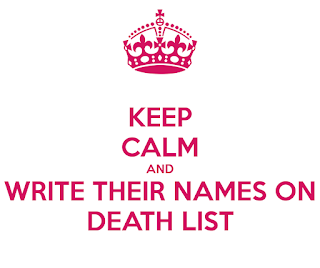 The National Rifle Association has published a list of its enemies. A well thought out list. An extensive list. When the NRA published such a list there is certainly the implied threat that "you're dead to me" will simply be translated to "you're dead!" The NRA's death list is frighteningly extensive.
Just about every association of doctors and nurses is targeted. School and teachers groups are bulls-eyed. Religious institutions including the Catholic Conference and United Methodist Church are listed.

Scores of actors are on the hit list including tough guys like Sean Connery, Mark Harmon, Sylvester Stallone, and George Clooney. They also are targeting American sweethearts like Tara Lipinski and Mary Lou Retton. Britney Spears is on the list, which is just cruel given her troubles.

The Hallmark Greeting Card company is on the list, as are the Kansas City Chiefs and St. Louis Rams football teams. Alan Colmes is pissed he didn't make the list.

They were careful not to put any sitting government officials on their list but the NRA does target a couple of retired judges. Just a hint, you know.
Posted by knighterrant at 10:52 AM

They hate so many people that it is hard to know, other than gun and ammo manufacturers and mass shooters, who they don't hate. Yet, most of the members would not likely agree, but choose to remain ignorant, merely contributing dollars to support their hate. The members' hands are no cleaner than the leadership's.