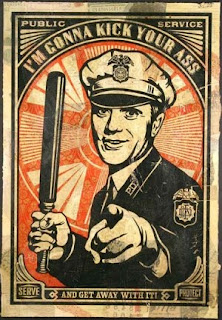 I've been catching up on This American Life podcasts and finally got to the episode titled Very Tough Love.

If you haven't heard it, it tells the story of Judge Amanda Williams of rural Glynn County, Georgia who runs the Drug Court out there with an iron fist somewhat like Judge Cal in the graphic novels.

Every jurisdiction has SOB judges like her. The Supreme Court has two (Scalia and Thomas). While most judges are fair and honest, there are many who orgasm on the power they wield and what the power allows them to do other people. They climax on the arbitrariness of being nice to one person and then fucking up another's life just because they can.

I did some further research on Amanda Williams and discovered the judge is threatening to sue TAL host Ira Glass. I found this as fascinating as Ira's original story, especially the exchange of letters. Glass has an outstanding Chicago law firm behind him; their skill is apparent in their reply to Williams' lawyer.

Williams' attorney, one David Oedel, is allegedly a law school professor. I say "allegedly" because his letter reads like it was written by an unskilled PR flack. Oedel would certainly flunk any student of his who submitted such a rambling, unfocused rant as a threat of legal action.

I doubt any lawsuits will follow. Partly because Williams is a small town thug who is used to intimidating everyone she encounters. Such tyrants tend to back down when their threats are met by tougher folk. Mostly there will be no lawsuit because Williams has no case.

Your right, there is no legal battle brewing…just her standard threats, she doesn’t want any spotlight on what she’s doing. She threatened Attorney Douglas Alexander with the exact same threats during her re-election, its her standard way to try to quash the truth and make people fearful of speaking out. She needs to go. This is only the tip of the iceberg, look into how she handles her civil and criminal courts. http://impeachjudgewilliams.com/what-you-can-do/