The Egyptian Roots of the Easter Story

The Judeo-Christian religions have borrowed from a lot of other cultures. Noah's Ark is pretty much copyright infringement of the Gilgamesh story. Christmas absorbed pagan winter solstice celebrations into Christianity while a lot of the Easter traditions are pagan spring fertility rites. There is even a theory that the entire monotheistic complex - Judaism, Christianity, and Islam - were all born from a 14th century BCE Egyptian religious cult. 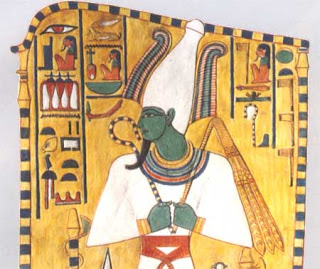 A lot of ink has been invested in making the case that the Jesus story is a repackaging of the story of Osiris. Basically, Osiris was a god who died and was reborn although how many similarities you find depends on your interested in the subject or how freaked out you are by the concept that Jesus was a phony.

One book I've read speculated that Jesus rigged the whole resurrection scene as a deliberate effort to claim to be the reincarnation of Osiris as the Osiris Cult was strong in the Eastern Mediterranean but that he died of his wounds before he could pull off the whole scheme. (I can't actually find that book now that I'm looking for it but, trust me, it's out there somewhere.)

For me, my favorite telling of an Osiris tale is from the TV show Stargate SG-1. 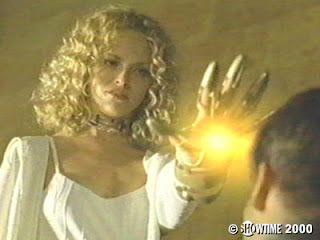 Sure, the historic Osiris was a male deity, but Anna-Louise Plowman is pretty and they do explain the sex change.
Posted by knighterrant at 11:09 PM

this is ridiculous...a streach..i have read both stories and can see very little similarities.