War Profiteering Is the American Way 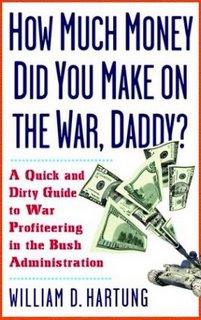 A commenter to my posting about Pat Leahy's War Profiteering Prevention Act noted that I just don't get the whole "capitalism" concept. He is partially right, war profiteering has long been a part of American capitalism.

During the Civil War, Lincoln's first Secretary of War saw a path to quick profits. Simon Cameron paid high prices for tainted food, knapsacks and uniforms that fell apart, thin blankets, and weapons that blew the thumbs off of the soldiers who fired them. Cameron pocketed hefty kickbacks for these no-bid contracts. Any similarity between Simon Cameron and Dick Cheney of Halliburton is a sick accident of history. Even though Lincoln fired him for his corruption, Cameron continued a successful political career.

"An honest politician is one who, when he is bought, will stay bought." ~ Simon Cameron

War continues to be a major profit source for American corporations. With a corrupt administration, the only cure is Congressional intervention. While the administration is saber-rattling a possible war with Iran, the Pentagon is shipping surplus military gear to middlemen who are selling it to Iran. Bush is arming a country he wants to wage war against. Profits on both ends; profits all around.

The 10 most brazen war profiteers
The Nation, 2003 editorial
Center for Corporate Policy
Iraq for Sale: a Robert Greenwald film

The final word for how destructive war profiteering can be for our country comes from Vladimir Lenin - "The last capitalist will sell us the rope that hangs him."
Posted by knighterrant at 8:16 AM

Nothing to add--just an excellent read. Thanks!

Kvatch, thanks. That is high praise.

Captain Graeme Smith wow power leveling hit a fluent 75 as his side successfully passed a world of warcraft gold modest victory target of 183 on the final day at the MCG to take an wow powerleveling unassailable 2-0 lead.

It was the South dofus kamas African's first-ever Test series triumph in Australia and dofus kamas victory in the third and final match in Sydney will see them leapfrog the home side at the top of the global Lord of the Rings Online Gold rankings.

South Africa ffxi gil were never under any pressure in eq2 plat their run chase and did not lose eq2 gold a wicket until just before lunch when the inspirational Smith Lord of the Rings Online Gold was trapped leg before wicket by Nathan LOTRO Gold Hauritz.

McKenzie struggled to buy ffxi gil a half century and survived strong eq2 plat lbw shouts from Brett Lee, eq2 gold who was bowling despite an injured foot that will Lord of the Rings Online gold keep him out of the Sydney Test.

It gave the tourists ffxi gil a priceless 65-run lead on first innings before man of eq2 plat the match Steyn worked his magic with the ball as Australia were eq2 gold bowled out on the fourth day for 247 in their second innings.

The pugnacious Smith was virtually runescape money lost for words in his victory speech.

"It has been such a special moment runescape gold for all of us, it has been an incredible team effort," he said.

"I have been smiling non-stop wow po since we hit the winning runs.

"To be 2-0 up after this game was something wow or we only dreamt of."

South Africa won the first Test in Perth from an unlikely position, chasing 414 for victory for the loss of only four wickets.

Aston Villa rode their luck at Hull City where an 88-minute own goal from Kamil Zayatte saw them leapfrog three points clear of Arsenal and into fourth place in the Premier League wow gold with a 1-0 win.

Villa had to survive Hull penalty appeals for a handball against Ashley Young in time added on, television replays showing that referee Steve Bennett wow gold correctly rejected the claims after consulting a linesman.

Bennett had been involved in controversy after just five minutes when American goalkeeper Brad Friedel looked to have handed Hull the initiative and threaten Villa's return to the Champions League qualifying wow gold zone.

Friedel spilled wow gold the ball under pressure from Nick Barmby and stand-in right-back Nigel Reo-Coker turned it into his own net as he attempted to wow gold clear.

But Bennett cut short wow gold celebrations at the KC Stadium -- and let Friedel off the hook -- when he ruled out the score for an apparent infringement by Barmby.

Promoted Hull were looking for only their second win in 11 games while wow gold Villa arrived unbeaten in seven and it looked to be heading for a goalless draw when the home side suffered a cruel late blow.

Welcome to the 2moons dil, In here you can buy the 2moons gold, Do you know that the 2moon dil in the game is very important, If you had more cheap 2moons gold. I think you can get the tall level, quickly come here to buy 2moons dil.

I like play online game, I also buy Aion gold and Aion onilne gold, the Aion china gold is very cheap, and use the Aion China kina can buy many things, I like Aion chinese gold, thanks, it is very good.