'And To the Republic for Richard Stands' 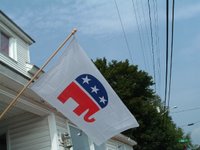 As someone stood up to lead the Pledge of Allegiance at a GOP dinner (in San Diego) Thursday, it was suddenly realized there was no flag in the room.

“Pledge to the elephant!” shouted Bob Watkins of the county Board of Education.

Says everything we need to know about where their loyalties and patriotism truly resides.

Posted by knighterrant at 8:43 AM