Trump's War on the Sun 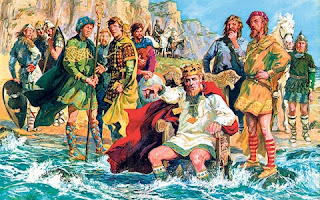 All the inhabitants of the world should know that the power of kings is vain and trivial, and that none is worthy the name of king. ~ King Canute

According to legend, Canute of England and Denmark had his throne placed on the North Sea shore where he ordered the tide to halt and not rise upon his kingdom or get his royal person wet. Of course, Nature ignores the petty commands of kings and presidents.

Trump has slapped a 30% tariff on solar panels. Knowing American business practices, domestic producers will decided to maximize their profits by increasing their US prices by the same 30% rather then developing an internationally competitive pricing structure.

Happily, I had my solar panels (made in Finland) installed five months ago (so, fuck you, Trump) and in that time I've generated over two megawatt-hours of electricity. I am now a net producer of electricity and because I also own a fully electric car I consume as little fossil fuel as possible (fuck you Rick Perry, too).

The world is adopting solar power while Trump is standing on the shore commanding the Sun to stop shining.
Posted by knighterrant at 4:05 PM