Since 9/11 the NSA has been able to get away with any abuse by squeaking "terrorism" and avoid any supervision by crying "national security." We were told to trust them even though they never gave us any reason to trust them. We were told to have faith in the oversight bodies like the FISA court and Congress. 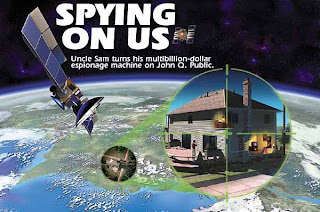 The head of the FISA "court" (It is called a court but it does not act as a court by any traditional definition.) has acknowledged that his court is a toothless rubber stamp. They swallow whatever justification the NSA gives them like a trout swallows a fly. On those rare instances when the recipient of a FISA search challenges it (only two of the biggest corporations in the world, Microsoft and Google, have had the courage to do so) the FISA court simply fails to respond.

Congressional oversight is nearly as lax. The chair of the Senate Intelligence Committee, my own senator Dianne Feinstein, is completely unconcerned by rampant NSA voyeurism even after the Washington Post got a leaked copy of an NSA audit that the agency had hidden from Feinstein. Their could be many reasons for her disinterest, my best guess is that the NSA has enough dirt to send Dianne and her husband to prison should she get feisty.

The NSA acts like people who have installed glass doors on the ladies restroom and then posted a sign reading, "Peeking Forbidden." The NSA is peeking with salacious joy and the one time someone had the balls to point out that fact the voyeurs have banded together to accuse the whistleblower of treason.
Posted by knighterrant at 10:18 AM

Awesome post. you nailed this one.
it's about fucking time everyone started to understand this.