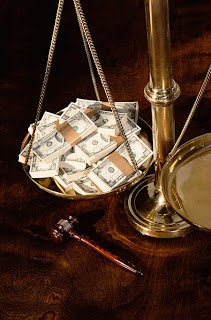 I was going to call this the dirty little secret of the Supreme Court but the fact is this is not a secret at all. Everybody in Washington knows that Justice Clarence Thomas sells his Supreme Court decisions.

If you want a favorable vote from Thomas the first thing you have to do is drop a few bills into the lap of his co-conspirator wife.

Now, I'm not criticizing Thomas, you can't expect him to be any better than his nature (crooked little pervert) but it does disturb me how cheaply he prostitutes himself. He sells out for just a couple thousand dollars when the going rate for a Supreme Court justice ought to be six figures.

Thomas, along with Antonin Scalia, does what he can to promote and encourage a culture of corruption throughout the American judiciary because he knows if the money is to continue to flow its putrefying stench must infuse all the courts of the land.
Posted by knighterrant at 12:37 PM

Yes, but I still find the whore and his pimp to be interesting.