The story that there has been an shake up of the Egyptian ruling party, all except Mubarak himself, reminds me of a story. 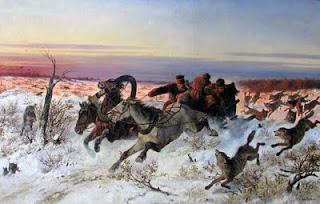 A Russian baron and his family are traveling the Taiga in winter when it is set upon by a pack of wolves. The baron whips the horses on but the wolves are closing in and will soon overtake them. The baron shoves his servant out of the sled, hoping the wolves will stop to eat him.

It works. For a while, but soon the wolves are again on the chase. Desperate, the baron looks at his lovely wife, kisses her passionately, and shoves her out of the sled.

The baron drives the sled on even faster but only a few wolves stop to maul his wife. The rest continue after the sled. There is now only the baron and his young son remaining. His son, his only son, the heir to his title and property is clinging to the baron as the wolves and now snapping at the traces of the sled. The baron puts his arm around his young son and throws the boy into the middle of the wolf pack.

There is no complex moral to this story. Mubarak is willing to sacrifice everyone close to him just to survive in power a few more days but it won't matter. In the end the wolves ate the baron too.
Posted by knighterrant at 11:23 AM