There was blood throughout all the land of Egypt. ~ Exodus 7:21 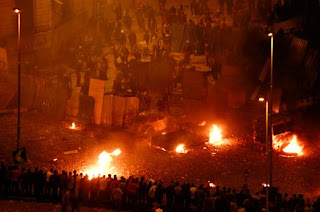 There are five factions in the Egyptian Revolution. On the side of Mubarak there are the wealthy elite of Heliopolis and Zamalek and there are the criminal thugs who work for the elite as police or goon squads. On the side of rebellion are the Muslim Brotherhood, hated and feared in Israel and therefore among American neo-cons, and the great majority of the Egyptian people.

The fifth faction is the army. The generals have all been made wealthy by corruption. The rank and file are not thugs but regular, everyday Egyptians. So far, the soldiers have refused to fire on the protesters but they have followed the orders of their generals and not protected the people from the pro-Mubarak hooligans.

The Muslim Brotherhood has always worked for MI6 and the CIA.

The army is split into factions; the CIA-Mossad-NATO faction wants to topple Mubarak and advance the agenda of Israel and the Pentagon.

Israel supports the toppling of Mubarak; Israel wants to grab the Sinai.