BlackWater and the Future

When fascism comes to America, it will be wrapped in the flag and carrying the cross. ~ Sinclair Lewis

The third of the ten steps is to ‘Develop a Paramilitary Force.’ Without a paramilitary force that is not answerable to the people’s representatives, democracy cannot be closed down; however, with such a force available to would-be despots, democracy can be drastically and quickly weakened. ~ Naomi Watts

I shall close my week wading in disgusting BlackWater by peeking into a possible future. What could happen after the Iraq War is over and we have a politically partisan, politically connected, ruthless, well financed and trained paramilitary force in bases across the United States?

In this article on Firedoglake, Naomi Wolfe points to the frightening fact that BlackWater USA is not some Iraqi invention but is an American enterprise. It has used its extensive political connections to suck hundreds of millions of dollars from the Federal tit. It is crafting for itself a position where it is unanswerable to any legal justice, whether in Iraq or the United States.

And they have had practice within the United States. After Hurricane Katrina, heavily armed BlackWater mercs were roaming the streets of New Orleans claiming the right to make arrests and use lethal force at their discretion. All this has positioned BlackWater as the likely paramilitary precursor to dictatorship. 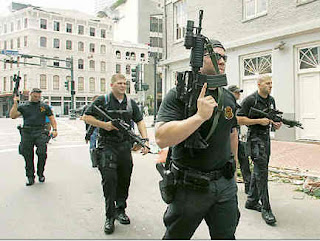 This is a chilling photo of BlackWater troops patrolling in New Orleans. The black shirts they are wearing are a striking reference to Mussolini's Blackshirts, his camicie nere. Like Mussolini's thugs, BlackWater soldiers are mostly ex-military. The motto of the Blackshirts was "Me ne frego." (I don't give a damn.) Judging from their work in Iraq it is a fitting motto for BlackWater as well.

What a US Dictatorship Will Look Like
For those wingnuts who squawk "Bush Derangement Syndrome" whenever anyone cautions against dictatorship, let me assure you it won't be George Bush. Bush lacks the balls and it is too soon. While the ground is being plowed it will take a few years to reap the harvest. Bush is more like a Bizarro John the Baptist preparing the way for some future anti-Christ. Mitt Romney is a possibility. He has the closest ties to BlackWater of any current candidate with one of its executives on his advisory team. Perhaps Erik Prince, the founder and owner of BlackWater, sees himself as the new messiah. Or, more probably, there is someone lurking in the shadows waiting to be anointed Primo Caporale Onorario.

The Jews of the coming Holocaust will almost certainly be Hispanics. Rep. Tom Tancredo (R-CO) has declared Hispanic immigrants an "invasion" and that Mexico is waging an "undeclared war" against the United States. Samuel Huntington in his 2004 book "Who Are We?" wrote that Mexican immigrants are a threat to the United States Anglo-Protestant values. Homosexuals, Muslims, and liberals will be targeted as always, but the focus will be on Mexicans. There are rumors, hopefully wacko, of FEMA preparing concentration camps around the country to hold people during times of martial law.

These are not things that must happen, only what might happen. BlackWater USA in both their existence and their culture make it more possible. So does fear of terrorism - dictatorships feed on fear, and the desire of fundamentalist Christians to force their faith upon the whole of the nation.

Pop Quiz ~ Which of these is not a philosophy of right-wing conservatives? (nationalism, authoritarianism, statism, militarism, anti-communism, corporatism, populism, and opposition to economic and political liberalism)
Posted by knighterrant at 8:17 AM

Just wanted to let you know I thought this was a great post.