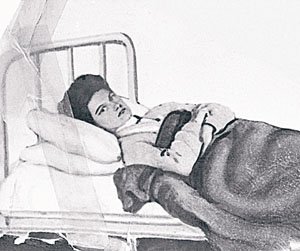 I really feel sorry for Robert Daniels. The 27 year-old man has committed no crime. He is imprisoned because he has a drug resistant strain of tuberculosis. He is held in solitary confinement and not allowed a television, radio, computer, or even a telephone. He is not allowed to take a shower and is forced to clean himself using wet wipes. His strain of tuberculosis is immune to nearly all treatment and can be spread when Mr. Daniels coughs or simply exhales. After he went out in public without wearing a mask he was picked up and imprisoned for the safety of the community.

All this has echoes from a hundred years ago and the story of Typhoid Mary. Mary was a carrier of typhoid fever and, employed as a cook, spread the disease to dozens of people. She was quarantined in 1907 and held as a prisoner for three years (when the above picture was probably taken, she was 38 years old). Released on condition that she never again work as a cook, Mary changed her name and continued cooking. In 1915 she was imprisoned for life. She lived as a prisoner for 23 more years, never feeling ill from the disease she carried.

Typhoid is like tuberculosis is one other regard. Typhoid also has virulent, drug resistant strains.

Posted by knighterrant at 4:04 PM