I tried to watch. I really did. I guess I'm not a political junkie. 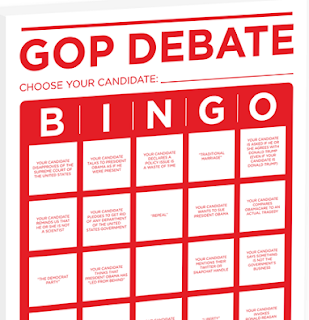 I stopped watching presidential debates now that they are produced by the TLC channel. Sort of a mash-up of 19 Kids and Counting and Here Comes Honey Boo Boo. But I did try this time.

I tuned in a little late and caught Scott Walker in the middle of his prayer to Saint Ronald the Reagan. Overwhelmed by a mixture of boredom and revulsion, I turned it off 15 seconds later. I felt guilty, like maybe I hadn't given it a fair shot so, a half-hour later, I turned it back on. This time Ben Carson was talking about something, I don't know what he said because I quickly slipped into a coma.

After that, fearing for my health, I decided to do what I have in the past and rely on pundits, blogs, and Twitter for the highlights.

Jeb on Point
I predict the moment that will get the most laughs on late night TV is the group photo when Jeb Bush stood on his tiptoes to make himself taller than Donald Trump. It's a kindergarten move that I predict will have a longer life that any of the words spoken.

Tapper as Don King
The consensus is that Jake Tapper didn't act as a debate referee but as a fight promoter. He spent the evening trying to get people to fight the schoolyard bully (Trump) and mostly succeeded. It makes for more entertaining television than thoughtful discussions of important national issues. It also makes Stephen Colbert's "Hungry for Power Games" skit frighteningly accurate.

Carly Won
Everyone from National Review to DailyKos agree that Carly Fiorina won solely because she forced the bully to back down because he was afraid to hit a woman on live TV. Some think that will make her the Great-Not-Trump Hope for the GOP establishment.

Carson: Nice or Wuss
Ben Carson stood out as the only person to not do a turn in the mud wrestling pit with Trump. While being the uber nice guy will appeal to some, the notoriously belligerent GOP base hate weakness and, for them, being nice is the ultimate weakness.
Rubio: "I wouldn't piss on you if you were on fire."
Marco Rubio made a joke about the California drought that landed like a proverbial lead balloon. Sure, no Republican is going to win the state but, Marco, whoever wrote that joke for you needs to be fired immediately. I mean, insensitive much.

Who Lost?
No consensus. The answer depends entirely on who the pundit supported going in. Some say Trump lost, others that he won. Trump got the most air time, by a large amount. That made him the sun around which all the lesser candidates revolved. I suspect the ultimate losers were the people being ignored. Scott Walker got less than half the air time of Trump and, according to reports, made nothing of his brief opportunity. So, Walker is probably the biggest loser.
Posted by knighterrant at 11:22 AM