The Next Not Romney

Newt Gingrich has worn out his four weeks atop the polls by saying truly insane things like he would arrest judges who disagree with him. Yet the thought of Mitt Romney still fills the mouths of Republican rank and file with partially digested vomit. It's time for a new Golden Boy. 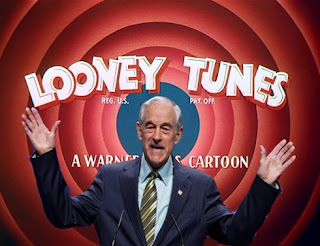 It's fun watching the panic from the Tea Partiers as they lurch from one idiot to another searching for a substitute for Nelson Rockefeller Mitt Romney.
Posted by knighterrant at 8:51 AM

This should be fun to watch.

Ron "The Constitution is unconstitutional" Paul has more than a few ideas that should alienate the masses.