Christmas is the most pagan of so-called Christian holy days.

Nowhere in the Bible is December 25 even hinted at, or any other day for that matter. Some people point out that "shepherds abiding in the fields" would have been a stupid thing to do in the dead of winter.

That date, however, is within the Roman Saturnalia holiday. This Winter Solstice carnival was wildly popular (emphasis on wild) in ancient Rome, lots of feasting, flirting, and drinking alcohol (your average Christmas party). As the new religion took root in the Roman Empire it made sense to merge the birthday of their God with the birthday of a new year. Early American Puritans were so disgusted by the pagan origins that they banned celebrating Christmas. 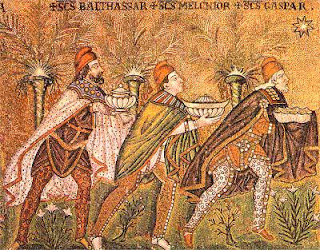 Christians point to the Three Magi. Fair enough. But next to the boozing, gift giving was a major part of the Saturnalia celebrations. 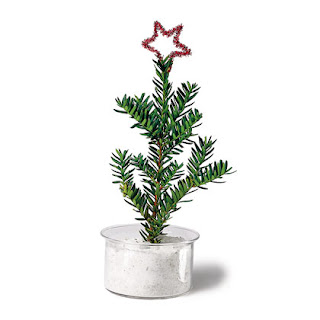 This tradition comes from Germany but this is another case of Christianity absorbing a much older pagan tradition. It was a common practice during the winter, especially in pre-Christian Northern Europe, to bring evergreen boughs into homes to provide some signs of life in that dead time.

Germans mercenaries brought the Christmas tree to America during the Revolutionary War. The Christmas tree arrived in England in the 19th century, brought in by their Germanic queen, Victoria. 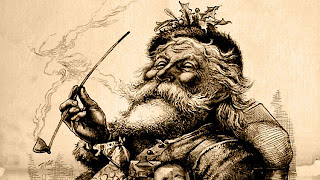 Saint Nikolas was a Greek monk of the Fourth century and is the patron saint of both Greece and Russia. One of his famous acts was uncovering a butcher who was killing children, curing them in a barrel, and selling the meat as pork (think Sweeney Todd). His gift giving occasion was once throwing coin purses through a window so a hungry man wouldn't have to pimp out his daughters.

The magical old elf with a long white beard living in the icy north, traveling the world in a single night, with reindeer is mostly an image of the Norse God Odin. In fact, when we venerate Santa Claus we are really worshiping the god of the Vikings.

The Santa Claus we picture was created by American illustrator Thomas Nast in the 19th century.
Posted by knighterrant at 9:32 AM

Saturnalia is not really our thing, since we don't bother with alcohol. But, we DO celebrate Yule, not christmas.

People are looking for a reason to celebrate and be happy. Ironically, most religions seem to favor a grimmer approach to life -- perhaps to justify why the "afterlife" will be so welcome. So, it only makes sense that ordinary people have looked to the traditions that arose separately from religions to find celebrations of life and happiness. It has always struck me as odd that religion needs to have a special time of year to celebrate "peace on earth and goodwill toward all men". Why not do that year 'round, instead of using the rest of the year for such pastimes as reminding us how evil tis group or that group is? I celebrate Christmas, but as a time of joy, not as a celebration of religion, and certainly not as a time to accent the perpetual battle of religions against each other and against ordinary people. I don't really care whether that is called Christmas, Yule, Saturnalia, or something else.

The argument that Christmas day falls on some pagan holiday in itself does not make it a borrowing from paganism. However we have direct reading from the Bible indicating the date of Christmas.
Luk 1:19 And the angel answered him, "I am Gabriel, who stand in the presence of God; and I was sent to speak to you, and to bring you this good news.
Luk 1:20 And behold, you will be silent and unable to speak until the day that these things come to pass, because you did not believe my words, which will be fulfilled in their time."
Luk 1:21 And the people were waiting for Zechari'ah, and they wondered at his delay in the temple.
Luk 1:22 And when he came out, he could not speak to them,

The only possible date for this is the day of Atonement. We know exactly the dateof that. From their count the pregnancy of Elizabeth. On the sixth month Mary become pregnant. Count 280 days from there it will fall within Dec. Jan area

Again
Luk 1:26 In the sixth month the angel Gabriel was sent from God to a city of Galilee named Nazareth,

So the scripture clearly indicate the date of Christmas. Use your Hebrew Calendar and arrive at Christmas which in our calendar happens to be December end to January beginning within the margin of error.