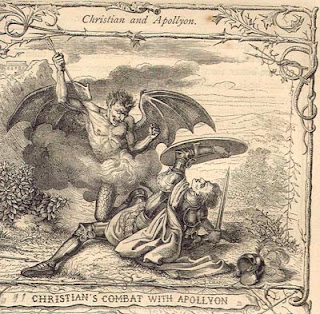 Could it be that Satan's Domain on Earth (Goldman Sachs) is in trouble? A Justice Department probe into insider trading appears to have caught Goldman Sachs in its net.

Could this begin the grand battle between good and evil - Christian versus Apollyon, Beowulf versus Grindel, the Thundercats versus Mumm-Ra? Probably not.

This isn't the first time that the Justice Department had Goldman Sachs by the short hairs. Last spring they had the Devil's Bank dead to rights for fraud over mortgage securities deals. If Justice had any fight in it several Goldman execs would have been looking forward to a few years of prison romance. Instead Goldman's punishment was a half-billion dollar fine (just a fraction (4%) of Goldman's take from the government AIG bailout) and a tepid mea culpa.

Atrios predicts, and I agree, that the worst Goldman will face from Justice this time will be a tiny fine. Goldman is just too powerful for the Justice Department. (think Doomsday versus Jimmy Olsen).

Posted by knighterrant at 1:09 PM

Dear Little Reality--What sort of dress is appropriate for a Goldman Sachs black mass? I realize black is typical, of course. But I really want the Evil One to appreciate my commitment to evil (and it wouldn't exactly hurt my evil career to get noticed, if you catch my drift). Would, say, a giant horned bonnet be over the top?