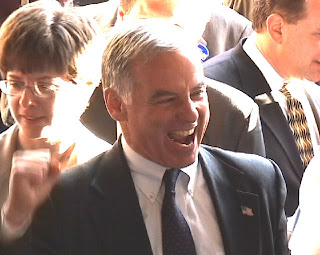 Howard Dean is stepping down as DNC chair. He deserves our thanks. It was Dean's 50-state strategy and it was Dean's energy that made the Democratic Party victory this year possible. Without him we might have fought, and lost, another close election.

Before Howard Dean, the Democratic Party believed in a 50 percent plus one strategy. There were states, like North Carolina and Indiana, where it was thought impossible for Democrats to win and we should abandon them to their fate. By shrinking the campaigns down to a handful of "battleground" states the Democratic Party played to Republican Party strengths. The Republican's top down campaign structure needs a small, narrowly focused campaign battle front. In essence, since 1992 national elections were a coin flip. We win half, they win half.

Dean's 50-state strategy was taken and perfected by David Axlerod and Barack Obama into their "Broad Battlefield" concept. Republicans were confronted with a truly national campaign that their tactics of microtargeting was wholly incapable of fighting.

Oddly, those with a knowledge of military history will recognize this. The German strategy of Blitzkrieg was microtargeting, concentrating overwhelming force on a few weak points. It was trumped by Eisenhower's "broad front" strategy that didn't allowed the Germans to focus on a counterattack.
Posted by knighterrant at 1:21 PM