A trillion here, a trillion there, pretty soon you're talking about real money. ~ Everett Dirksen (adjusted for inflation)

The Bush/Paulson bailout package is now estimated to be $7.4 trillion. That is a lot of money. 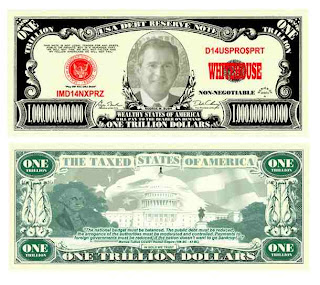 Bush trillion dollar bill
Posted by knighterrant at 8:11 AM