Bailing Out the Buggy Whip Makers

The Big Three automakers have been bleeding cash for years now. The chart below shows the stock action for General Motors over the past 15 years. The current stock price is $2.90, a level not seen since WWII. 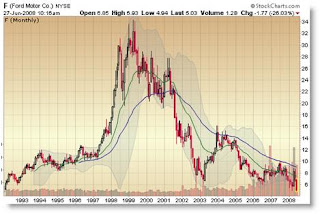 The current economic collapse has exacerbated their troubles but it didn't cause them. The economy could turn rosy tomorrow and the automakers would still be in a peck of trouble.

At one time there must've been dozens of companies making buggy whips. And I'll bet the last company around was the one that made the best goddamn buggy whip you ever saw. ~ Danny DeVito, Other People's Money

Take the new Ford F-150 pickup truck. They advertise it has a computerized entertainment system that would be the envy of many homes. It comes with "black sports-leather captain's chairs," wi-fi connectivity, and a rear-view camera for those people who never mastered using a mirror. Ford hasn't been able to sell enough of the previous versions of this truck to make a profit so they have made a truck with so many bells and whistles it is hard to find the truck. But, it's a hell of a good buggy whip.

I understand why politicians want to bail out the American auto industry. When it goes belly up it will take a million-plus jobs with it. But the American auto industry has been a dying industry for over a decade. They have been behind the Asian automakers on every practical innovation. Their refusal to retool for hybrid technology until very recently has left them hopelessly trailing. They have fought CAFE standards at every turn. They have been devoid of ideas. Even bad ideas would have been better than their total lack of ideas. They business models have been, "don't mess with failure."

It will probably be necessary, this year, to bailout American automakers. Their failure just now will ripple through the economy at a time when it cannot stand another major shock. But don't be deluded, it is simply throwing money down a rat hole. There is not enough value left in those companies for Toyota, Honda, or Amalgamated Buggy Whip to want to buy them out.
Posted by knighterrant at 7:43 AM