They used to say in vaudeville that you never want to follow an animal act. John McCain fell into that trap. Never a compelling speaker he was positively soporific last night following Palin's snarling attack dog performance. 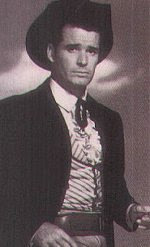 The real Maverick was a gambler, an inveterate poker player, and something of a con man. He was lazy and, above all else, a coward. As his Pappy always said, "He who fights and runs away lives to run away another day."

The real Maverick was Bret Maverick as played by James Garner in the 1950's television program. The entire series can be seen weekdays and 6 pm on the Encore Western cable channel.

As my old pappy used to say, 'work is fine for killin' time, but it's a shaky way to make a living.' ~ Bret Maverick

Posted by knighterrant at 7:31 AM

I used to enjoy that program, in my youth. The movie was pretty good, too. But, we gave up on TV decades ago.