As McCain lurches from one farce to another his campaign has taken on the surreal look of absurdist French theater. The latest travesty hitting the rumor circuit (via the London Times) is that the campaign is planning a surprise October wedding of Bristol Palin to swing the election.

Nothing would shift those swing voters better than turning the marriage of a pregnant teenager into a media circus. A shotgun wedding between a self-described "fucking redneck" and his underage bride would be the feel good event of the year. People by the millions would forget their economic woes and the endless Republican wars and race to vote Republican. 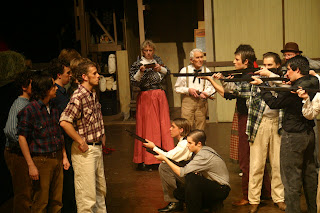 What the wedding photo will look like. (from a production of 7 Brides for 7 Brothers)
Posted by knighterrant at 8:37 AM