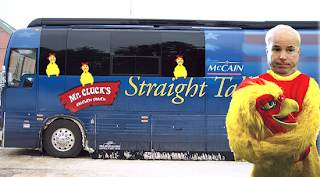 It is frequently true in life that a man who commits acts of bravery in his youth becomes a coward in his old age. John McCain is such a man.

With age, the courage of youth is often replaces with fear. Boldness has morphed into imprudence. An agile mind becomes hesitant and unsure. Such it is with John McCain.

In many ways it is sad to see the decline of this man. Sadder still would be if the country places its fate in the hands of this shell of a man.
Posted by knighterrant at 3:53 PM