The Trump and the Grapes 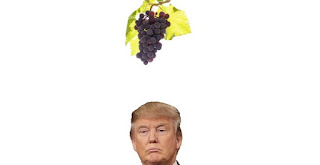 Driven by hunger, a fox tried to reach some grapes hanging high on the vine but was unable to, although he leaped with all his strength. As he went away, the fox remarked 'Oh, you aren't even ripe yet! I don't need any sour grapes.' People who speak disparagingly of things that they cannot attain would do well to apply this story to themselves. ~ Aesop fable version by Plato

It would be funny if he were just some random prepubescent 70 year-old, but he's not. Hearing Trump crying that he didn't really want the vote on TrumpCare he was calling for is a pathetic rationalization for failure. For thousands of years every school children has been able to recognized and ridiculed the "sour grapes" excuse.

Trump now seems to be saying he doesn't care what healthcare looks like as long as he gets to attach his name to it like it were another overpriced hotel.
Posted by knighterrant at 11:54 AM