A couple of disconnected items.

Ivanka Trump has announced the official mailbox for all corporate and governmental bribes to her and her husband. She plans to create a private fund to receive "donations" from governments and multi-national corporations. Ostensibly to help female entrepreneurs (i.e. rich women friends of Ivanka) a lot of the money will certainly go to "overhead," in other words the pockets of Ivanka, Jared, and the rest of the Trump clan. 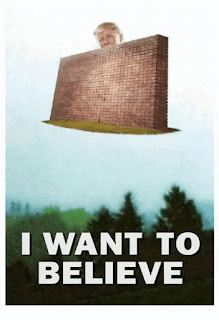 Tom Sullivan has a fascinating article in the link above. The word he mentions, kayfabe, appears to be old carny slang to remind their fellows to stay in character because a rube is present. It is part of professional wrestling lingo meaning maintaining the illusion of reality in their fake performances. The contract between pro wrestling and its fans is that they will fake reality and their fans will believe its real.

That relationship explains Trumpism better than anything else I've read. Trumpists want to believe so badly they unquestionably accept the charade. They realize it is fake but  maintain the illusion of reality as they call truth "fake news."

Take the border wall. There is no interest in funding it in Congress or Mexico, now or ever. Yet with each setback Trump floats a new funding scheme which his acolytes swallow blindly, condemning any statement of reality as "fake."

The delusion of illusion is so thick they accepting bizarre funding proposals like corporate sponsorship ("this mile of wall is brought to you by Coca-Cola"), have drug smugglers pay for it (like their money isn't stashed away safely), or just pretend that Mexico will magically pay for it eventually.

Somewhere in there Trumpists know it is all fake but they want to believe so badly that they do believe and in believing they have to declare any hint of truth as "fake" lest it shake their beliefs.
Posted by knighterrant at 2:08 PM