Biloxi and the New Jim Crow 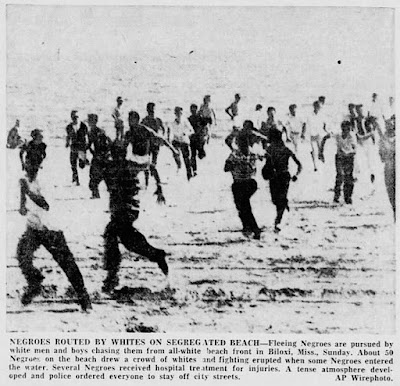 Biloxi, MS showed this week what the new Jim Crow will look like in the deep south. Biloxi renamed Martin Luther King Day to "Great Americans Day" in an effort to bury Dr. King under a pile white segregationists. Biloxi's mayor, named FoFo because Southern whites are weird, rescinded the announcement.

Biloxi is the home of the Jefferson Davis Museum. The museum will celebrate MLK Day with a Civil War reenactment where Johnny Reb will rout the Northern scum in a fictional battle that never occurred in Biloxi. On Lincoln's Birthday they will host a pilgrimage to the tomb of the unknown Confederate soldier where they will honor the men who gave their lives for "the American way of life" (i.e. slavery).

Sixty years ago, Biloxi was noted for whites rioting to prevent blacks from setting foot on their all white beaches. In the worst of the riots Biloxi police recruited rioters to attack African-Americans throughout the city and the only people arrested were the black victims. (How dare you bleed on the good white people of our town.)
Posted by knighterrant at 9:32 AM