If Wall Street mega-bankers offered me a six-figure payday for talking at a podium for 45 minutes I'd take it. I'd tell them whatever they wanted to hear, I'd massage their egos and justify their greed. 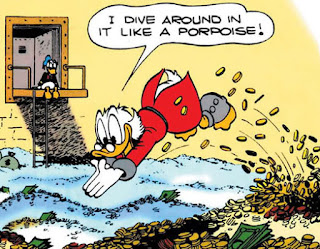 For that kind of money I'd prostitute myself to their wishes knowing that with all that lucre I could buy enough liquor to drown my shattered dreams and debased values. If, at some later point, people wanted to know what I had said to those inflated egos to pump more hot air into them I'd clam up tighter than a, well, clam. That would be my little secret that I would take to my grave.

The big differences are that I'm an unimportant peon that nobody with an endless supply of cash would want to hear speak and...I am not running for President. Hillary had to know these questions would some day be asked.

What Did She Say?
I don't know except if she had said anything to upset the Goldman Sachs crowd, questioned their beliefs, or attacked their business model it would have been headline news at the Wall Street Journal. They were happy with her speeches. She made them feel good.
Posted by knighterrant at 3:32 PM