God and the Oklahoma Tornado

Let's see if I get this whole God thing correctly.
If another soul from the Middle East had caused this kind of devastation we would have called him a terrorist and sent him off to Gitmo. So, according to the experts, those folks who claim to love God, why did he do this? 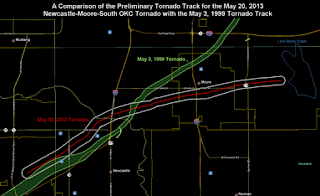 Pat Robertson blames the victims, saying that if they had prayed harder God would have "stilled the storm." Westboro Baptist Church leader Fred Phelps says God was attacking NBA player Kevin Durant for supporting a gay basketball player. He missed.

Lots of pastors cop out and fall back on the old "God works in mysterious ways" bullshit. Others blame all natural disasters on Eve and Original Sin. Still others say that tornadoes are God's way of proving to us whose really in charge; exactly like stomping on ant nests and watching them scurry for their pathetic little lives proves to ants that man is superior. Some suggest God is powerless against Nature and the best He can do is help pick up the pieces, kind of a lame version of FEMA.

Survivors say that God answered their prayers and saved them. Except many of those who died also prayed just as hard. And then God goes and save an atheist who didn't pray or anything.

On a related note, the Moore, OK city website says the reason they don't bother with storm shelters in the town's schools is that there is only a 1 to 2 percent chance of a tornado on any spring day. Given that spring is 90 days long that translates to every freaking year! There have been 22 tornadoes to hit Moore in the last 123 years with four in just the last three years.

The real reason is the Republican that run Oklahoma would rather see kids die violent deaths than raise taxes to save their lives.
Posted by knighterrant at 9:30 AM

Mainly, people are just really blinded by years of nonsense religion that they claim to believe no matter how inane, internally inconsistent, and just plain silly it all is. But, it then fuels people to treat others badly and to act in anti-social ways "in the name of god".

I am rather curious how the Oklahoma government can support sending a single penny to deal with the Moore catastrophe. After all, those people are just "takers".

I think God lets hard things happen to us so we can help others who then face the same challenges. Who in their life can say they have faced/survived 2 devastating tornadoes. A few can in Moore, OK.

It is in God's mercy that he would take the lives of people early so they would not become fully engulfed in their sin and lose their life to an eternity in Perdition. That is true Mercy. Would you let your loved ones hold their hands on a hot burner and stand by and watch as their flesh gets burned off???? No???? so why would God stand by and watch his children do the same in their sin? He pulls us out of situations to save our souls. He ends our lives in His own mercy to save us from eternal Hell. Foolish lives many have lived but by His grace He has brought them home early. Do not be the fool who has a short life because it is so full of sin.

Would you expect me to live long if I bought a motorcycle and drove to work everyday doing wheelies and driving 180mph???? NO. Nor would you expect someone called by God, living a foolish sinful life, to live for very long.

I'm not saying we don't sin. EVERYONE Sins. I Sin. But it's what you do after you Sin. Seeking God's forgiveness, telling him how you messed up. Asking for Guidance and for his strength. Comming to the realization we are absolutely not capable of doing any GOOD whatsoever without him living in us. THERE IS NO GOOD WITHOUT GOD. I am purely evil without him. But I am purely Good with him. Everyone has this battle raging inside of them if they are seeking after good things. Others are completely blinded by the enemy, just like in the movie The Matrix. Purely a secular movie, but with so much insight as to what is actually happenning in the spiritual realm.