Why Trump's China Tariffs Will Fail

Some countries have seminal events that shape them decades and even centuries in the future. For China, one of those events was the Opium Wars. 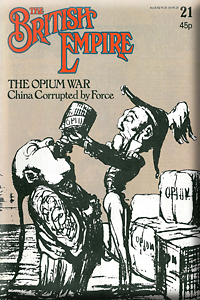 Two hundred years ago, Europe, most notably England, was running a trade deficit with China. China made things that European consumers wanted like silk and tea while Europe didn't produce anything the Chinese found useful.

England had one potential cash crop, massive poppy fields in India but China soon made it illegal to import opium and confiscated over 1200 tons of opium in British owned warehouses in Canton. England and the East India Company were outraged.

The British sent an army and their fleet to compel the Chinese to legalize the narcotic trade and won an easy victory. China was forced to allow the free trade of opium, pay over half a trillion dollars (inflation adjusted) in reparations, and give the port city of Hong Kong to the British.

A decade later, the British decided the Chinese were not sufficiently subservient to British interests and, joined by France , Russia, and the United States, attacked Chinese coastal cities. Again, the Western forces had an easy victory and forced the Chinese to surrender more concessions and pay additional reparations.

This short YouTube film gives a good and entertaining overview of the history.

Why History Matters
China calls this the beginning of their Century of Humiliation when China was the victim of multiple foreign exploitations. Surrendering to Westerners in a trade conflict is unthinkable. Each Trump tariff will be met with a firm response. And this time the Americans are the ones with the addiction, to Chinese electronics.

Americans may view this trade war as transactional, just business. To the Chinese, a trade war is an existential attack on their nationhood. They will fight harder.
Posted by knighterrant at 10:37 AM